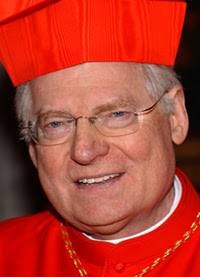 Editor: There will be no decision till the end of June, probably.  This was originally predicted from a report by 'Il Giorno' at kreuz.net.  The favorite candidate might be refusing this honor, but the Holy Father may want him in this position very badly. At least the favorite is a friend of Tradition.

(Mailand)For more than a year the naming of the expected Archbishop of Milan has been expected.  This holds not only for Italy, but throughout the world.  The Archbishopric of Milan is the largest Diocese in the World.  The Cathedra which was that of the Church Father St. Ambrose, has brought several Popes in the Twentieth Century.  Because of the Ambrosian Rite, still in use in the north Italian metropolis, it gives the Archdiocese a special position in the Church.

Angelo Scola, Patriarch of Venice is the Favorite

The serving Archbishop Dionigi Cardinal Tettamanzi since 2002, has already passed the age limit two years ago.  Pope Benedict XVI has asked the Cardinal to remain in office.  Since then, the successor carousel has turned.  At the same time two Cardinals are held as favorites for the prestigious See: Cardinal Angelo Scola,  born 1941, the Patriarch of Venice with a very strong relationship with Pope Benedict XVI.  Scola is closely associated with the society of Communion and Liberation (CL) founded by Father Giussiani. He immediately put the Motu Proprio Summorum Pontificum in effect by establishing it at a church near the Grand Canal, which was entrusted to the Society of St. Peter.  In the past year the Cardinal celebrated Holy Mass in the Old Rite himself during his visit to the church.

Cardinal Gianfraco Ravasi, born 1942.  He's been an Exegete since 2007 of the Papal Council of Rites and since 2010 a Cardinal, and was himself brought into play as successor in Milan.  Both come from Lombardy and the names of both were part of a fiver-proposal sent to the Nuncio for Italy this Spring and submitted to the Holy See.

What is remaining are three names proposed.  One such is included by the Pope with the same or other names.  He can select from them, but also may chose not to.  In the proposal of three, which is only presented to the Congregation of Bishops, is missing Cardinal Ravasi.  Although in Milan the Corriere della Sera is last but not least, advocated for Msgr Ravasi, his naming is becoming more increasingly unlikely, the more it becomes evident that the Pope does not seem to show himself ready to build a balanced Roman curia.

The Diocese of Several Popes

The Episcopal Congregation has put forth the names of three qualified candidates: in the first place is Cardinal Angelo Scola, Patriarch of Vencice, follwed by Msgr Francesco Lambiasi, Bishop of Rimni and Msgr Aldo Giordano, standing observer of the Holy See in the Council of Europe.  On Thursday 9 June the Congregation of Bishops will evaluate the three remaining proposed three and make a recommendation to the Pope.

Msgr Giuseppe Bertello, the Apostolic Nuncio for Italy directed three different interviews, with which he received the opinions of Bishops, Priests and Laity from Milan and Lombardy.  At the last inquiry in the past weeks were effecting the aforementioned fiver proposal, which included Cardinal Ravasi and Msgr Pietro Parolin, Apostolic Nuncio for Venezuela.  The last mentioned appear in any case, will not appear in the three proposed which the Congregation will evaluate.

According to canon law there is nothing that says the Pope is bound in his decision.  Even the Congregation can propose other names to the Pope. Recently in the last days there were even new members named to the Congregation, which might set a different accent. These are Cardinal Mauro Piacenza and the emeritus Bishop Lorenzo Chiarinelli.

Cardinal Scola is therefore the favorite for the Diocese of St. Ambrose. Before his appointment the Patriarchate of Venice he was Bishop of Grosseto, Rector of the Lateran University and the former Cardinal Joseph Ratzinger's valued collaborator in the Congregation for Doctrine and the Faith.

Bishop Lambiasi has been the spiritual assistant of Catholic Action Italy.  Msgr Giordano, who is still not a Bishop, belongs to the Papal Diplomatic Staff.  he has already been on a three list last year for the Archdiocese of Turin.  At that time the Pope decided finally for the Bishop of Vicenza Msgr Cesare Nosiglia.

This is the first time in a century that the naming of a new Archdiocese of MIlan, one of the most important Diocese of the world, has gone according to orderly election process in place for most of the other Diocese. At the last a naming  will always happen  directly through the Pope without the intercession of the Congregation of Bishops and their procedures.

On the 9th of June the last evaluation of the candidates will take place.  A few days later Cardinal Marc Ouellet, the Prefect of the Congregation of Bishops, will submit a recommendation to  Pope Benedict XVI.  The name of the new Archbishop of Milan will be be made foreseeably known at the end of the month.

Yes! Finally someone writes about auswelllife.