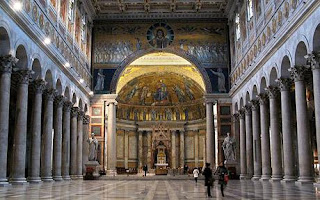 Italy . On Good Friday about 150 Romanian Gypsies, and about 40 children, occupied the Roman Basilica of St. Paul before the walls. They were previously driven from their illegal camp in northwestern Rome.  A report from the German 'Catholic News Agency' said "the Vatican" offered them an "overnight asylum" in the Basilica.  They camped in the space outside of the nave.  Fifty gypsies, who absolved themselves with a walk,  were not allowed back into the Church by the security forces.  By Easter Night, there were still 60 people camped in the Church.  The Gypsies occupy themselves in Rome primarily with begging and pick pocketing.

Basilica contains relics from the great Apostle himself.
Posted by Tancred at 11:57 PM