The Pope really doesn't have any other choice, than to conclude with the Society of St. Pius X.  Because besides them, the Council in Germany doesn't have many left. 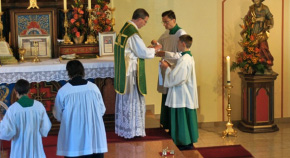 (kreuz.net) On 7 January 36 year old man visited Holy Mass with the Society in the village of Kleinwallstadt in Unterfranken.

It appeared to him that the Mass was well attended for a week day.

He noticed, "that I wasn't -- as in other religious services -- the youngest one there -- but at least somewhere in the middle."

He estimated the median age of those present at about thirty or forty years old.

Next to the reporter there were some boys about fifteen years old.

They showed themselves "enthused" by the old Mass -- the reporter explained:

"The devotion was so heavy and deep, that it was almost alien".

The priest spoke during the Holy Mass, who was silently reading, not a single loud word.

For that reason, the reporter asked the question, why the youth would visit such a weekday Mass, while such age groups are almost never represented in Novus Ordo religious services.

As an answer he rhymed it out that those Pius people are drawn by the living example of the celebrating Priest?

The corresondent was also astonished that the Pius-priest prayed in every Mass for the Bishop and the Pope -- "which can not be said of many diocesan priests."

Which brought him to the point:  "Critics of the Society of St. Pius X insist that they do not subject themselves to the Pope."

At the same time he called the words of Germany's Jesuit Provincial.

This one had promoted "open disobedience" against the Pope and German Bishops, "not to wait for a decision from Rome",  rather to "ordain trustworthy laymen to the priesthood".