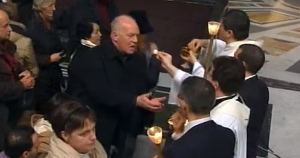 At this years Christmass Mass by Pope Benedict XVI the priests who were giving Communion refused communion in the hand.

[kreuz.net, Vatican]  At this years Midnight Mass in the St. Peter's Basilica, there was no hand communion.


Father Z at wdtprs.com from an Italian priest in Rome who wrote:


In a change to former practice, those distributing Holy Communion at the Holy Father’s Mass tonight were told that ‘at all Papal Masses Communion is to be given only on the tongue.’ The usual statement that Prelates receive in the same way as the Laity remained.

You can see the video at kreuz.net, here from Gloria TV.
Posted by Tancred at 8:31 AM

Email ThisBlogThis!Share to TwitterShare to FacebookShare to Pinterest
Labels: Communion in the Hand, Midnight Mass, Rome

Perhaps a way of doing 'damage limitation' after the pope's comment's on condom use. A way of keeping the tradtional Catholics on board?

Whilst I receive Communion on the tongue, I am disgusted to see these divisive behaviours of refusing Communion in the hand. The practice is historical and of apostolic origin but more importantly it has been approved by the Church.
What has been approved by the Church beocmes traditional automatically.
http://matt1618.freeyellow.com/communion.html

My last comment is a bit mean-spirited, I think. It is indeed good to see Holy Communion being distributed with commensurate dignity. This has been an on-going pracitce by pope Benedict during his Masses. Long may it continue and spread.

Communion in the hand was another example of archeologism employed by destructive individuals before during and after the Council and it has been successfully argued in various places that the practice, as it was intended to do in the first place where it was first illicitly introduced, diminished people's reverence for the Blessed Sacrament.

It's more like a metaphor for what's going on in the Universal Church.

The disobedient priest, like those in other parts of the world like him, should found their own denominations if they really want to strike out on their own.

The practice of CITH started out as a liturgical abuse, now it's a sign of liberalism.

Apostolate and Michael, I find your comments more divisive and disrespectful than anything. First, there is nothing more respectful than receiving our Lord on the tongue. So many receive him like an hors d'oeuvres with total lack of respect these days. Secondly, if the Pope gave this directive, maybe what one should do is reflect on (1) his role as the Shepherd of the Church and (2) why he made this decision in his God-given position.

For those who belive CITH is "normal" please go to the curia romana documents and get well informed; we are not trying to win a discution, is a matter of facts; CITH was and is an abuse, you would find this in all the Holly See documents realated; don't belive anybody just use the oficial magisterium.
Pax et bonum, MERRY CHRISTMAS!

CITH is absolutely tied in with disbelief in the Real Presence. More in tune with the Lutheran notion of the community meal.

I began receiving the Eucharist on the tongue less than a year ago when attending a morning mass which had everyone receive kneeling and on the tongue. Being born in 1982, I was taught to receive in the hand and thought nothing of it. The difference simply in reverent posture and the gesture of accepting rather than taking has truly effected my faith. I believe the Pope is very wise in this form of emphasizing the importance of our approach to the Eucharist.

(Katharian Emmerich 1824) stigmata--Considered the most famous of all German mystics, saw Jesus distribute the bread into the mouths of the Apostles, Also (Therese Neumann 1962)

A brief summary of the finds is that out of 100 unconsecrated hosts placed in black-gloved hands (for easier detection), there were 118 particles of the hosts left in the hand after the hosts were taken.