Meet the New Nuncio for UK 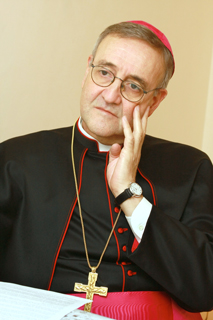 [Valle Adurni] There seems to be a consensus emerging on the Italian blogosphere (as on Palazzo Apostolico among many others) that our new Nuncio was appointed because of his success in soothing the volatile temperament of the Russian Orthodox. In this his achievement has in all regards been conspicuous. He is, it is said, expected to perform the same miracle with the Church of England. Let us set aside the question of whether the aggrieved sensibilities of the CofE are perceived to be more important than the aggrieved sensibilities of the Russian Orthodox, or the extent to which either side brought it on themselves. What matters is that Mennini was perceived to have done a good job, and it is hoped that he will do it again.

Read further analysis, at Valle, here.
Posted by Tancred at 7:08 AM