Braunschweig Dominicans Out of Control Promote Homosexuality on Website

Under pressure from without the Braunschweiger Dominicans have undertaken some cosmetic alterations. 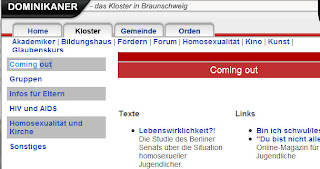 (kreuz.net)  Homo-Dominicans in Branschweig have removed the worst references to unnatural offers of seducation from their website after  substantial protests.

Till yesterday the propaganda material as well as "homosexual-groups" and homo-networks were openly promoted -- "in place of spreading Gospel and the teaching of the Catholic Church as well as informing about their precautions for the prevention of sexual abuse" -- as the protestant Website 'medrum.de" explained it.

Because: "All of the available information blocks reglated to the theme of Homosexuality and the connections to information ports to homosexual groups remained unchanged at the Dominican website."

The site 'medrum.de' cited from an editorial that the 'Workshop for Gay Theology' had published in 2008.

There you can read things like:  "It is unforeseeable that the hierarchy of the Catholic Church has shifted the terrain of its homophobic interventions."

The gay-site was describing the Church's  fight against the State's privileging of  homosexual concubinage.

The editorial asks the question if homo-ideology could change the approximate "homophobic powerstructures in the Church", which supposedly have hardened  in "visciouness and hypocrisy".

One finds also on the homo-website of the Braunschweig Dominicans now as before the rubric "Homophobia".

Here comes the distorted homosexually disturbed  Udo Rauchfleisch to the fore.  He fantacizes over "anti-homosexual violence".

In reality the homo-ideology is already long acquainted with a readiness to commit violence, joined by state-tolerated left storm troopers -- and waltz down anyone who dares to criticize the homo power grabs.

The site 'medrum.de" wonders about the site of the Dominicans and why they haven't put anything about the Catholic Church's teaching about homosexual-perversion.

There is also no information about spiritual groups and therapeutic approaches for those who suffer homosexuality, to follow the Gospel and free them from their homosexual temptations.

The Portal also maintains that the Dominicans "explained nothing about sexual abuse" on their website.

Accordingly, in the Church's area where abuse is relatively rare, over eighty percent of the perpetrators are homosexuals.


Read original at kreuz.net in German...