The Liturgical Picnic is At an End: Priest Says Mass Ad Orientem 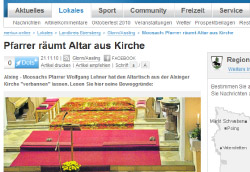 An Upper Bavarian Parish has democratically decided to dispose of its altar-table:  "The Altar symbolizes a Cross, therefore the community.  But in our time, in which everything is revolving around itself, we need a break from this clogging."

(kreuz.net, Moosach)  Already at the end of July Pastor Wolfan Lehner had put the altar-table at his church St. Michael in Moosach aside.  The municipality is 27 Kilometers south-east of Munich.

The website 'merkur-online.de' reports that the Pastor had informed his parishioners of this change in his Christmas letter.

The Upper Bavarian Parish of Moosach belongs to the Archdiocese of Munich and Freising.

At the end of July the Parish moved the wooden altar-table out of the Church for a concert.

After that the Parish decided to leave the furnishing for a probationary period in the Sacristy till January.

The Parish is very open to the high altar-- explained Fr. Lehner.  There is no dictatorial style according to the motto:  "We're doing this just so, right now!"
\
At the same time the wooden altar-table contains no relics.

The table is not even consecrated:  "For me as a priest, it is displeasing to  consistently use an unconsecrated altar to celebrate the Eucharist"  -- says Fr. Lehner.

Apparently, the Church has three fixed altars which were previously unused.


The Victim Priest is not an Facilitator

The liturgical alterations which took place after the repositioning seemed minimal to the pastor: "For the preparation of the gifts, the back side of the altar is used."

The site 'merkur-online.de' defamed the Holy Mass at the High Altar as "a peculiar sight" -- because the congregation, as in the old Liturgy, commonly face in the same direction.

Pastor Lehner explained to the paper, that at the Sacrifice, the priest is not a facilitator or the host of a celebration, who tries to motivate everyone to participate in the 'Praise of God'.

Much more, the celebrant is the first supplicant of the community, who "strengthens their backs".


The Pastor is An Opponent of Church's Language

The pastor wants to go communally with God.  The disposing of the altar-table is a symbol of that beginning:

"The altar symbolizes a cross, therefore the community.  But in our time, which which everything revoles upon the self, we need a break from the clogging."

The new reorientation shows the goal of the Parish:  "a line to a fixed altar, a common way to God."

For the necessary return of the language of the Church, Fr. Lehner will not hear:  "certainly not by me".

He has already 'held' [sic, abgehalten] Masses in Latin: "But that breaks down the communication with the community"  -- he believes.
Posted by Tancred at 11:23 AM