Society of St. Pius X Celebrates in the Basilica of Lisieux 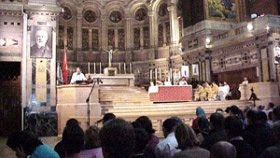 Different Bishop, different morals: In the last years the Society of Pius X has celebrated with thousands of faithful in open air High Masses behind the Basilica of Lisieux. Tomorrow the Faithful may use the Basilica.


[kreuz.net, Lisieux]Tomorrow afternoon the Society of Saint Pius X will celebrate the Old Rite in the Basilica of St. Lisieux.

The Society has published this on their French Website.

The yearly pilgrimage on foot to Liseux was organized from the Priory of the Society in the village Gavrus in Normandy.

the faithful -- accompanied by many children -- must kneel on the asphalt.

From 1988 to March this year the old liberal Bishop Pierre Auguste Gratien Pican (75) headed the Diocese of Bayeux-Lisiux.

His successor, Msgr. Jean-Claude Exechiel Boulanger (65), will open the Basilica to the Society for the Holy Mass tomorrow in Lisieux.

Already in 2005 the Rector of the Basilica allowed an exception and permitted the Society to celebrate in the house of God.

The celebrant may also wear the vestments of the earlier Parisian Archbishopo Maurice Cardinal Feltin (+1975).

This ornament was used at the consecration of the Basilica.

May God bless the good and faithful Msgr. Ezechiel Boulanger.
In prayers for SSPX, may they persevere in defending and protecting God's Truth and the Tradition of Holy Mother Church.
Restore All In Christ The King!

Monday, April 2, 2012
VATICAN COUNCIL II SAYS JEWS NEED TO CONVERT, CATHOLICS ARE THE NEW PEOPLE OF GOD BUT REPORT ON SSPX CLAIMS VATICAN COUNCIL II SAYS OTHERWISE
An Associated Press report,Vatican to breakaway traditionalists: not enough by Frances D'Emilio (VCstar.com)says the Society of St. Pius X (SSPX) 'has opposed the Vatican's decades-long outreach to Jews, Muslims and members of other faith. More broadly, it opposes the liberalizing reforms the Vatican enacted in the 1960s.'


However a reading of Vatican Council II’s Nostra Aetate 4 says ‘the Church is the new people of God’.Catholics are the new people of God . The Chosen People.Then Vatican Council II further says that all people, Jews included, need Catholic Faith and the baptism of water for salvation (Ad Gentes 7). Jews need to enter the Church with Catholic Faith and the baptism of water to avoid Hell (for salvation).


So Vatican Council II is still saying like the SSPX that Jews, Muslims and other non Catholics, including Protestants and Orthodox Christians, need to enter the Catholic Church for salvation.


So the so called liberalizing reforms is not supported by any text from Vatican Council II.


Vatican Council II also mentions that there can be non Catholics saved in invincible ignorance, with a good consicence (LG 16), with the ‘seeds of the Word’ etc. We accept this as a possibility just as did the popes and Church Councils of the past. They knew that we do not know any particular case. So they are not an explicit, exception to the dogma extra ecclesiam nulla salus or to Ad Gentes 7 and Lumen Gentium 14, Vatican Council II.


Vatican Council II is in accord with the literal interpretation of the dogma extra ecclesiam nulla salus .


Vatican Council II has not changed the teaching of the Catholic Church with respect to other religions as this report on the internet alleges.


The AP report says ‘Jewish groups have expressed concern that the Vatican's overture to the breakaway Catholics could call into question 50 years of progress in Catholic-Jewish relations.’ It is the Jewish Left political position that Vatican Council II has changed church-teaching. They are unable to cite any reference from Vatican Council II.


The report states: ‘A Vatican statement, issued after Friday's meeting, said both Benedict, and Levada's office, studied the Society's response to the papal overture. But the response, delivered to the Vatican in January, "is not sufficient to overcome the doctrinal problems that are at the foundation of the fracture between the Holy See and the Society."


The Vatican has never announced that Vatican Council II states that Catholics are the new people of God and that Jews need to convert to avoid Hell, according to Vatican Council II. Instead the Vatican is building up a reputation of throwing away Catholic doctrine for the sake of peace and security.

Tuesday, April 3, 2012
Fr.James Martin S.J does not say the popes, the Bible and Jesus were anti-Semitic


I think the SSPX in reality does not reject Vatican Council II according to the texts of the Council.Nostra Aetate 4 says the Church is' the new people of God'. While Ad Gentes 7 states all need Catholic Faith and the baptism of water for salvation. This includes Jews.
Is Vatican Council II now anti Semitic for this Jesuit priest ?


Fr.Martin is really saying the SSPX rejects the documents of the Council, which includes Nostra Aetate, as interpreted by the Jewish Left.


There is no text in Nostra Aetate which says Jews do not have to convert or that Jews are saved in general in their religion.That Catholics should have good relations with the Jews and others was taught to us by Jesus and it is explained in the Bible long before Vatican Council II.

Regarding other points against the SSPX, as being anti Semitic,some of the quotations are those of the popes. Other information comes from the Bible.

Fr.Martin does not say that the popes, the Bible and Jesus were anti-Semitic.
-Lionel Andrades