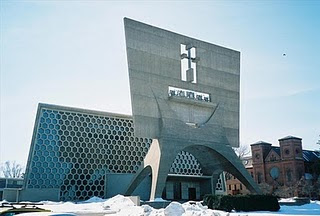 Home of the World's Ugliest and Most Expensive Bible

Following a rebuke from Archbishop Nienstedt, a Pro-Homosexual monk held a Mass for those school and abbey sponsored miscreants and publicity seekers. Insightful comments about priest who held Mass at Modernist Abbey "on a cold day in Hell" and his friends "down in da cities at other allegedly Catholic locales", here and here.

Photo: Abbey-Roads
Posted by Tancred at 3:57 AM