One of the Monks at this venerable institution once said, quoting Milton, "Better to rule in Hell than to serve in heaven." In another professor's mouth, it might have been a case of dramatic posing to capture the attention of the class, but you always got the sense he was rooting for the bad guys, and as subsequent events would have it, he was. 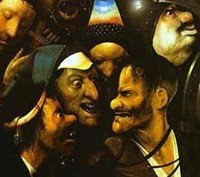 Humility and complete dependence upon God are very good things. Jesus spoke often of them. The problem is that kneeling for Communion suggests, rather, complete dependence upon a clergyman who feeds you like a child. There is nothing in the teachings of Jesus to even hint that Christians should have this childish attitude toward ordained authorities in their community.

Link to Kneeling Catholic, here.
Posted by Tancred at 9:56 AM

Is that a picture of a Church or something from the Jetsons?

how is it that Collegeville retains the right to grant advanced degrees in theology?