A Church Space Devastated After the Counci,l Restored 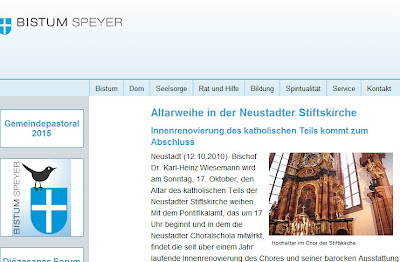 The Diocese of Speyer have renovated a protestant Church for the old believers (traditionalists). The supper table is gone, the tabernacle is back, where it belongs, and the communion rail has been put up.

[kreuz.net, Speyer] Today the Bishop Karl-Heinz Wiesemann (50) of Speyer blessed a new altar in the collegial church in Neustadt an der Weinstrasse. The pontifical office with altar blessing begins at 5pm, according to the website of the Dicoese of Speyer.

The collegial church has a protestantic and a Catholic part. They are have been separated from each other for 300 years by a wall.

In the course of the last years the church and especially the part belonging to the Catholic community -- renovated the choir.

After the Second Vatican the church head took the altar from the high altar and set up a dinner table.

Now the altar was put back in the place it had previously in the high altar.

In addition the high altar received again the original, in any case ripped out, tabernacle.

Further renovations include electric installations of pew heaters and a new paint finish.

In the distant future the Gothic comminition in the arches will be renovated.

From next week the old believing Community of the Diocese will celebrate the old Mass on Sundays and feastdays at 11:00.

Till now the traditionalists were housed in the parish church of St. Laurentius in Dirmstein -- 25 Kilometers from Newstadt.
Posted by Tancred at 1:28 PM