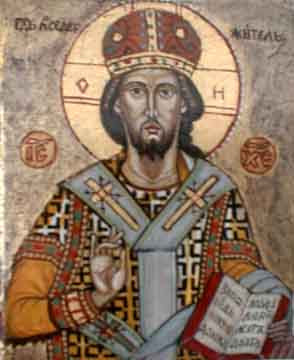 Polish Bishops' Conference: "The Kingdom of Christ is Not of this World"

Warsaw (kath.net/KAP) Poland's bishops are against the idea of a popular movement for the Consecration of Poland to Christ the King -- who take as their Motto: "Christ, King of Poland". This plan should be given up, said the president of the Polish Bishops' Conference, Archbishop Jozef Michalik, this Wednesday at the close of the Autumn Meeting of Bishops in Warsaw. The Kingdom of Christ is "not of this world".

In the concluding explanation the Bishops warn against the supposition, that the Entrhonement of Christ as the King of Poland, "will solve all problems". In place of this they propose, the deepening faith in Christ as the "King of the Universe". Michalik recognized the good intentions of the people's movement.

More than 1,000 people had demonstrated in Warsaw this weekend for a proclamation of Christ the King of Poland. They came with National flags and pictures of the Crowned Christ, King of Parliament from the Presidential Palace. "The Movement for the Sovereignty of the Polish People" had called this demonstration.

Already in 2006 the Church had criticized around 40 priests, who then proposing a Christ the King blessing of Poland. The proposal elicited no comment from the Parliament. The organizers explained that in 1656 Poland officially proclaimed the Mother of God as the "Queen of Poland".

The Church will be so much better off when the skulls of the current crop of Bishops have joined those of their predecessors on the floor of hell.

Pardon my impetuous interjection, but where do you get off wishing the Bishops would go to Hell? Monarchist or no, that's unacceptable according to the most basic principles of charity and hope. And I'm not even disagreeing that what they did was stupid; but just as you'd let God judge a king for his tyranny, let God do the eternal judging unto life or death and keep out of His decision, please. It's disgusting watching people who profess to be Catholic promptly going back on one of the basic things that being part of the One, Holy, Catholic and Apostolic Church makes different from the heretics.

Of course, we don't know where Bishop Weakland is going, per se, but he's shown no remorse for what he's done. I'd say he was defiant if anything and resentful of anyone who's accused him or wanted to hold him accountable.

And he's pretty typical. Most of these men go to their deaths without the slightest penitence for the destruction they've caused.

I'd say St. John Chrysostomos' prediction is a safe bet for most Bishops.

I think the Faithful, as many as possible, should join together and make the consecration, with or without the bishops. They should get as many priests as possible to join them. This would probably embarrass the bishops, but no matter. Bishops come and go. It will show Our Lord the love that the Faithful have for him and would be of immense blessing, no doubt.

God help us sinners stumbling about in the dark but woe to him who turned out the lights.

Almost every Catholic has held an enthronement ceremony in their own home, you don't need a priest present to put Him in your hearts.

The fear of the Bishops, and their apparent ignorance, to enthrone Christ as the King of Poland brings memories back of another consecration that was never accomplished for which someone would have much to suffer.