Blessed Cardinal Newman and The Jews 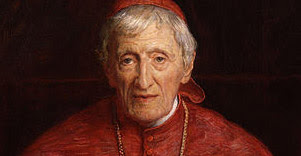 The Unbelieving Jews Were Cast Out by God

"Let us pray for the Jewish People, that they will return to the Lord their God, whom they have crucified". From Bl. John Henry Cardinal Newman (+1890).

[kreuz.net] Our Lord questioned the Pharisees and spoke to them: Who do you think Christ is? Whose son is he?"

They answered him: "The Son of David."

For the Prophet Isaiah had said before: "A branch will sprout from the root of Jesse".

Jesse was the father of David, of the Kings of the Jews. The "branch" or plant was a visual image of the all holy Maiden.

"And there shall come forth a rod out of the root of Jesse, and a flower shall rise up out of his root." (Is. 11.1): The flower, that blooms from the stem, is our Lord -- the Son of the holy virgin, Mary.

"And the spirit of the Lord shall rest upon him" (Is 11.2). At the baptism at the Jordan the Holy Ghost descended upon Him.

Behold the days come, saith the Lord, and I will raise up to David a just branch: and a king shall reign, and shall be wise, and shall execute judgment and justice in the earth. In those days shall Judah be saved, and Israel shall dwell confidently."

Therefore the Jews said, when they argued whether our Lord and Savior was the Messiah: "Doth not the scripture say: That Christ cometh of the seed of David, and from Bethlehem the town where David was? " (John 7: 42)

It was the mission of the Jews, that the revealed Savior, Christ, the Victim and the redeemer of the whole human race, the all-powerful Savior, should be descended from their country and people.

However -- horrible as it is to say -- when He came, they overcame him and condemned Him to death: "He came unto his own, and his own received him not" (John 1:11).

As they disowned Him, so he rejected them.

They led Him to death, and he gave them into the power of their enemies, who destroyed their holy city of Jerusalem. they were driven from their land and remain homeless and unsettled even to this day.


Give to the Jews the True Faith

Let us pray for the people of the Jews, that they return to their Lord and God, Whom they have crucified!

You seed of Abraham and Son of David, Adonai and leader of the house of Israel: You appeared to Moses in the burning bush and have given him the Your law on Sinai.

You key of David and scepter of the House of Israel, You open, and no one closes, You close, and no one opens: do not visit at home, O Lord, the sins of the father to the children, be not angry for ever, rather strengthen the poor people, that once stood so high in your eyes and have sunken so low!

Consider not the old priests and learned, the Pharisees and Sadducees, forget Ananias and Caiaphas, Judas and the senseless rabble which first shouted: "Crucify Him!"

Recall Your pity from Your anger! Forget You their stiff necks and hard heartedness, their blindness for things of yesterday, their love of this world and their luxury!

Touch their hearts and give them the true Faith and the spirit of penance!

Have Mercy, O Jesus, on Your own brothers, the countrymen of your Mother, of St. Joseph, Your Apostles, St. Paul, the righteous of the Old Testament, Abraham, Moses, Samuel and David!

O Lord, hear: O Lord, be appeased: hearken and do: delay not for thy own sake, O my God: because thy name is invocated upon thy city, and upon thy people. (Daniel 9:19) Do not refuse your own desire, O my God, for your name was first established in the city of Jersalem and under Your people.

Another People Took the Place of the Jews

When Our Lord Jesus Christ had been rejected by His own people, the Jews, He denied them, and called another people in their place.

The Evangelist followed with these words " He came unto his own and his own received him not." (Jo 1: 11-13) but to the others: "But as many as received him, he gave them power to be made the sons of God, to them that believe in his name. Who are born, not of blood, nor of the will of the flesh, nor of the will of man, but of God."

That is to say: all men, who believe in Him, from whatever race or country they come, He made into his children, He gave to them the grace and the promise of Heaven.

He warned the Jews, since the time of grace had lapsed for them.

"I say to you," he said to them, "the Kingdom of God shall be taken from you and given to another people, and shall be given to a people yielding the fruits thereof." (Matt 21:43)

For that reason St. Paul was agitated, His great Apostle, to rend his shirt, when he saw that the Jews would not obey, that they "contradicted and blasphemed" (Acts 18:6) and said:

"Your blood will come on your heads! I am clean: from henceforth I will go unto the Gentiles."

This Goes for the Protestants As with the Jews

As God had disowned the Jews, His own people, so will He reject every other people, who reject Him.

For so said St. Paul the same: "If some from the branch (Rom 11:17-21) - that means the Jews -- be broken, and thou, being a wild olive, art ingrafted in them, and art made partaker of the root, and of the fatness of the olive tree, Boast not against the branches. But if thou boast, thou bearest not the root, but the root thee. Thou wilt say then: The branches were broken off, that I might be grafted in.Well: because of unbelief they were broken off. But thou standest by faith: be not highminded, but fear. For if God hath not spared the natural branches, fear lest perhaps he also spare not thee."

This misfortune has come to our own land -- England.

God had blessed it for nearly one thousand years and called it. But it left off, lost the Faith and was expelled from the Church.

Let us pray for the reunion of the peoples with the Faith and the Church of Christ!

Just goes to show why Jews will NEVER trust the Catholic Church.

Just goes to show why the Catholic Church should NEVER trust the Jews.

I don't see anything wrong with the above. BTW, I am Jewish, I converted to Catholcism. Long live Fr. Newman!

We don't see anything wrong with it either.

"Turn Thine eyes of mercy towards the children of that race, once Thy chosen people: of old they called down upon themselves the Blood of the Saviour; may It now descend upon them, a laver of redemption and of life."