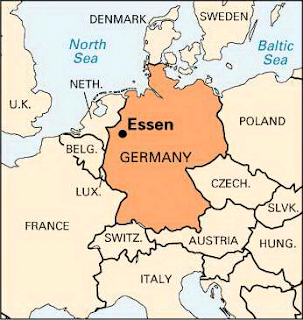 A German Bishop has said what few will admit: there is today in comparison with the number of practicing faithful, no fewer priests than in earlier times.


[Kreuznet, Essen] "In the our diocese those faithful who want to celebrate the Tridentine Rite should find room."

Bishop Franz-Josef Overbeck (45) of Essen said this in an interview with the German newspaper, 'Tagespost'.

To the question, if the old-believing Society of Saint Peter would get a parish he said, "I think its smart to proceed as previously."

Clearly the Bishop meant the integration of the Old Mass in the modern parishes.

The Bishop has good relations to the priests through Fr. Berhard Gerstle of the Society of Saint Peter.

Father Gerstle regularly hears confessions in Essen Cathedral and ministers clearly in unity with the Bishop.

In the interview Bishop Overbeck discussed a "sober view of the Priest shortage":

"One sees it at once in the viewpoint of the regular church attendees, where there's an approaching close relation as in the past between young priests and young consistent Mass goers.

Msgr Overbeck has directed "countless discussions" with his priests.

He wants to strengthen self-knowledge and spiritual.

The parishes in the Ruhr district are "unusually large". This doesn't make the life of the priest easier:

"I speak very clearly as Bishop: 'I will not jostle celibacy". It is the priet's proper way of life".

Upon learning that other Bishops jostle with the unmarried state of Priests, Msgr Overbeck said:

"That may be the opinion regarding my colleagues -- I have never participated nor will I participate in that."

The Young Priests are Traditional

Bishop Overbeck assessed in the Clergy also a difference between the generations:

"The generation of the Council and those that shortly before found their priestly vocation, often wonder critically, if they have found the right way.

"And not infrequently the older men are astonished at what the younger men are doing."

The younger in the meantime live a Tradition bound form of the priestly life. That is not actually valid for them all, but it is really true for a large part."

Had the younger priests today a completely different biographical and interior point of departure than their older colleagues in their 50s and 60s.

Today the younger priests must inure themselves to "prevail over many others".

Msgr Overbeck has made his mission known, "to encourage and strengthen priests."

Additionally the "vocabulary of the Eucharist" must be put back more in the middle.

To Defend the Teachings of the Church

He still absolves his appearance on a German talk show last April.

It belongs to his duty to publicly and substantially discuss.

The Bishop's statements enraged then the anger of shameless homosexuals. The Bishop bore it with equanimity:

"We learn to live with the reality that the Church and her teachings are not accepted any more.

And it is often then, when we directly step in the sense of moral theology, with these often bulky expressions of doctrine to the public, which not many agree with any more:

Even then we must stand for them.

That is also in the Catechism -- but that can in a broadcast of this sort in any case, not so fast."

The Church must "defend the value of man in the will of God, there where he is on the ground."

The basic mission of the Church must remain clear: Sexuality, Partnership and love belong together.

Correction: error was made about Father Gerstle's membership in the SSPX. He actually belongs to the FSSP, thanks.
Posted by Tancred at 2:04 PM