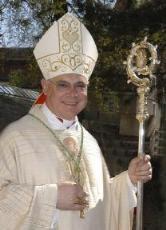 Regensburg's Bishop attempts to stir the pot on the SSPX's upcoming ordinations in Germany this year on June 26 in Zaitzkofen as announced on their website, here. The local ordinary, Bishop Gerhard Ludwig Müller, who undoubtedly has bigger fish to fry, wants to make trouble.

Bishop Gerhard Ludwig Müller speaks of a "provocation". One such demonstration could do possible damage the reconciliation of the Society of Saint Pius with the Catholic Church.

Zaitzkofen/Regensburg (kath.net/KNA) The traditional Society of Saint Pius propose the 26th of June to ordain three deacons to the Priesthood. The General head Bishop Bernard Fellay will confer the Sacrament by a Mass in the courtyard of the Seminary in the Upper-Pfalz town of Zaitzkofen, as explained by the internet site of the Society. The three candidates are a 62 year old from Sweden, a 37 year old from Czechia and a 28 year old from South Tirol.

The Regensburg Bishop Gerhard Ludwig Müller in whose Diocese Zaitzkofen sits, spoke on Monday of a "provocation". One such demonstration may damage the Society of Saint Pius' re-unification with the Catholic Church. At the same time he encourages the Society to forgo ordination till the status of their orders is clarified. Such events should "only be undertaken with the permission and knowledge of the Pope".

Already in the past year, Müller had criticized the then undertaken ordinations. He renews again his claim that it is an act of schism by the Society to ordain priests without the express authorization of the Pope and without the permission of the local Bishop. Whoever refuses to acknowledge the Second Vatican Council or parts thereof, may not have the full Communion of the Catholic Church.

Pope Benedict XVI. had lifted the excommunications of the four Bishops of the Society in January of 2009, including Fellay, in order to initiate a dialogue. Since then there have been talks in the Vatican with the Society to clarify points of contention in Doctrine.

The Society of Saint Pius X, founded in 1969 by Archbishop Lefebvre deny the central Church reforms of the 20th Century. They are not recognized by the Vatican. Unauthorized priestly ordinations by validly ordaiend Bishops are valid according to Catholic Church law even though they lack the permission of the Pope.

Photo: Diocese of Augsburg
Posted by Tancred at 2:54 PM

OH come on!!!! And he probably welcomes protestants, charismatics and muslims more as his brothers and sisters rather than the SSPX.
THIS IS SUCH a joke. With the German church (like almost everywhere else) in shambles today, this is a ridiculous statement

Dear Bishop - I will be there

Good info, thank you for it.