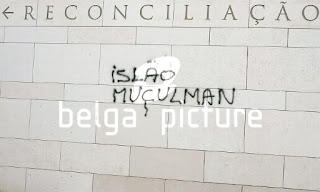 It is possible that Muslims didn't do this, but if they did, they should be expelled wholesale from Portugal. Pehraps they don't like the ugly architecture which is more reminscent of vandalism than anything that's been done so far, like the pagan Hindu ritual approved by the rector a while back.


Now, THIS is vandalism: 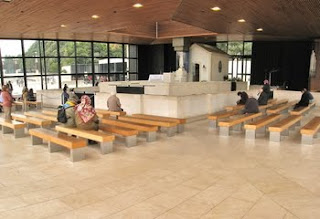 [Portugal] In a press release Monday, officials from the shrine announced that in the early hours of Sunday morning, four statutes on the sides of the church as well as the church itself were painted with graffiti.

According to the statement from shrine officials, “the difficult work of cleaning” is under way.

The communiqué added: “In reporting what has happened and without knowing who has done this, the shrine [officials] confirm [our] sadness and assure that the issue has been reported to the police.”

h/t james mary evans.
Posted by Tancred at 7:07 AM