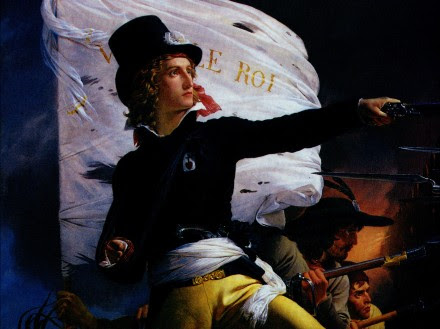 NPR reports on the Mass for King Louis XVI at St. Dennis, there's some balderdash in the report, but it's surprisingly sympathetic to our cause.

Copyright © 2010 National Public Radio®. For personal, noncommercial use only. See Terms of Use. For other uses, prior permission required.

Every January the Royalists of France, or is it that the Royalists de France, gather to mark the date when King Louis XVI was beheaded. His death marked the beginning of the French Republic. Yet many who remember the kings death hope that France will some day restore the monarchy.

ELEANOR BEARDSLEY: Organ music thunders through the stone cavernous basilica of Saint Denis on the northern outskirts of Paris. More than 800 people have gathered here, not just to pay homage to King Louis XVI, but to mourn the death of the French monarchy. Saint Denis is the necropolis of the French royal family. More than 50 monarchs, including Louis XVI and his queen, Marie Antoinette, are buried here.

BEARDSLEY: The mass is in Latin. The priest swings a censer of incense on a chain. The somber service in this stone-cold Seventh century church resonates with regret for a France that lived 16 centuries in the Catholic monarchy. The priest describes the day it all came to an end when Louis XVI was led to the guillotine.

Email ThisBlogThis!Share to TwitterShare to FacebookShare to Pinterest
Labels: Royalist

weigthloss-diets said...
This comment has been removed by a blog administrator.
January 29, 2010 at 3:18 AM