Edit: he's not fond of evangelism, among so many other things. Cardinal Tauran replaces Cardinal Bertone - A Camerlengo has important role in preparing the papal election in the conclave. In the election of Pope Francis, Tauran has already announced the Pope and his papal name.

Vatican City (kath.net/KNA) The French Cardinal Jean-Louis Tauran (71) has been appointed by Pope Francis to "Camerlengo of the Holy Roman Church". Thus after a Pope leaves from office by resignation or death, play a key role in the Vatican until the election of a successor. The Camerlengo (Chamberlain) is responsible for preparations for the election of a pope in the conclave and the administration of the papal estate while the Holy See is vacant.

Tauran has, since 2007, been President of the Pontifical Council for Interreligious Dialogue. He had announced the name of Pope Cardinal Jorge Mario Bergoglio on the balcony of St. Peter's Basilica on 13 March-2013. Tauran succeeds Cardinal Tarcisio Bertone. It was the last official title that the former Cardinal Secretary of State, who was 80 years in December, still held in the Vatican.

Trans: Tancred vekron99@hotmail.com
AMDG
Posted by Tancred at 8:11 AM 4 comments: 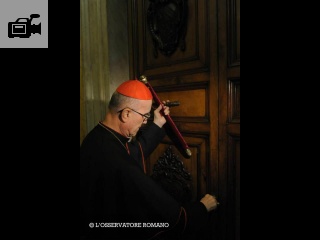