Fabulist Incendiary Renounces Debauchery and is Consecrating Himself to Saint Joseph

Edit: does this mean he won’t be bringing it up all the time?

March 9, 2021 (LifeSiteNews) — Milo Yiannopoulos, the gay man whose conservative messaging and willingness to speak the truth sparked riots on university campuses may well trigger more outrage now that he describes himself as “Ex-Gay” and “sodomy free,” and is leading a daily consecration to St. Joseph online.

Two years ago, when Church Militant’s Michael Voris famously challenged Yiannopoulos to live a chaste life, Yiannopoulos was not defensive. Instead, he acquiesced, and humbly admitted his human weakness.

“I know everything you’re saying, and I’m just not there yet. And I don’t know if I’ll get there,” Yiannopoulos told Voris at the time. 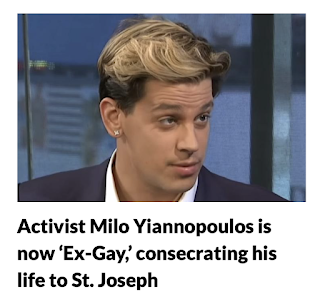 I hope it's not a stunt....but he's still living with his gay partner.

Who cares? Voris still hangs with his old “friends” and he still pisses off the gay establishment

It is a day-by-day struggle. He is to be commended.
Hopefully, he has a Traditional Priest who will counsel him in the Sacrament of Penance frequently.
He must also NOT make a cottage industry about his renunciation of the life.
The more he talks about it outside of the Confessional, the more likely he will fail.

An alcoholic does not become a bartender. A child molester does not get a job in a children's daycare center. A homosexual must divorce himself from the whole lifestyle.

Avoiding near occasions of sin ring a bell? Both are setting themselves up for a fall...

I admire his political views and for speaking the truth. but his lifestyle is/was a problem. If he is truthful in this initiative and devotion, then he is to be praised.

Would he being doing this if he hadn't been ostracized for downplaying underage sodomy?

Good for Milo.
He must change playgrounds and playmates. (The live-in has to go.)
May St. Joseph keep him on the path.

Andy Gobbler....that was very sinful of you. And during Lent!

I never heard that about Schneider

Neither did he.
He is being catty.

Burke, I knew. Voris loves him.

Do we have to refer to him from this point forth as “Ex-Gay, Milo Yiannopoulos?”

Whether living in the same house with some particular person is an occasion of sin or not is an empirical question. Those who pontificate from a thousand miles away that "the roommate has to go" are presumptuous.

What kind of question is it, then?

Voris hid (hides?) it because he had everything to lose. But, Milo has to be thinking there is no gravy train here. Most conservatives (Trump included) are cool with buggery and don't want to touch this kind of conversion with a ten foot pole. The hierarchy won't want anything to do with him. His alt-right credentials will scare off the respectable conservative Catholic publishers. If he was a protestant, the evangelicals would be trumpeting his name, but what are they gonna do with all this Latin Mass garbage he keeps talking about? He's philo-semitic because of his family and his laissez faire economics.
Milo needs to be embraced by trads but they must remain very cautious. Who knows, maybe he can call out the 🐮💩 in Courage

I'm disappointed in orthodox/conservative/trads who don't welcome Milo into the fold and pray for him. Will Milo fall? Yes, he will. How do I know this? Because every single one of us will sin...again, and again, and again. I do not believe this a publicity stunt on Milo's part. I've been following him for years and I believe he has a good heart...at least a heart good enough not to toss St. Joseph in for a dash of verisimilitude. Milo needs our prayers, and he's got mine. No matter what happens.

Great comment.
Roosh is another recent convert to Christianity (Armenian Orthodox) and is becoming an unofficial spokesman for his sect.
Nothing more dangerous than a recent convert dedicating his life to
missions & evangelization.
Sincerely hope Milo is not trolling the many naive gullible yet well meaning Catholic faithful.
Also,he NEEDS a valid Priest or Bishop.
The Sacraments of Trent are to be obeyed under pain of anathema.
God bless -Andrew

Milo should give it up and get a job managing a hair salon or something. Not only will he fail, but he’ll rope in a lot of suckers in the meantime. Everything he touches turns to rust.

You guys are unreal on this....wish the man well and PRAY for him. He's voiced a nagging prompting of conscience over this for many years, but sins of the flesh are some of the most difficult to root out. I give him the absolute benefit of the doubt here, and i have no doubt that his battle will be an unimaginably difficult one. Will you not offer your support and prayers for help?...if not, deep shame on you; you're not Christians.

How many times do you have to be fooled?

You don’t owe him anything, he’s already been paid.

In the beginning the Christians voiced suspicion of Saint Paul.
With his reputation, would you have blamed them?

how's he a proven huckster?...he spoke out boldly for the right; got canceled (and MUCH worse) for it when canceling wasn't cool; never changed his philosophical position. He wrote some books that he promoted...gee, that's awwwful. Again, from the wildly unpopular view against the woke. How the heck is he a huckster?

I love ya T, but seriously, you sound more like a bitchy queen here than Milo ever did. Give the guy the benefit of the doubt...he's ALWAYS said that he felt hoomosexuality was wrong; he just couldn't break the bonds....let's pray, with the help of God's grace (and St. Joseph's help!) that he truly does.....there's precedent you know....

"Amen, I say to you, tax collectors and prostitutes are entering the kingdom of God before you."....because they truly repented. Quit being the choleric elder son.

I’m not dispensing heavenly favor, just expressing my opinion of the pornographer Bannon and his minions.

how's he a huckster?

Tancred, as a strategy to deflect from his massive personal insecurity, has always been a Christless lying demonizer of all who threaten his fragile ID. Now it's official.

feybriel, you couldn't carry Tancred's sandals. He's honest (even in disagreement) and he's a man; you're....well,...not that.

Idk, if you missed his endorsement of pederasty, that was enough for me.

It’s not just that he’s associated with the lowlife Steve Banian, but a really long line of not keeping promises and pretending...