Cardinal Müller: “I Don’t Know the Wording of the Interview, But the Effect is Fatal” 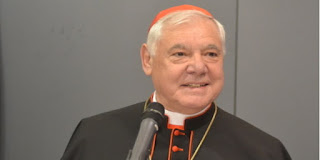 "The Catholic faithful are irritated, the enemies of the Church feel confirmed by the representative of our Lord Jesus Christ, whose sonship they reject." said Cardinal Gerhard Müller

Vatican (kath.net) I do not know the exact wording of the interview, which is often ambiguous.  But the effect is fatal.

The Catholic believers are irritated, the enemies of the Church feel confirmed by the representative of our Lord Jesus Christ, whose sonship they reject.  Instead of using theological and philosophical arguments of reason, one appeals to feelings, thus using sentimentality to checkmate the rationality of faith.

Faith does not depend on a political option in the right or left spectrum or on an ideological position between conservatism and progressivism, but only on the truth, which God himself is in his being and in the word of his historical revelation.

The Christian believes in God as the first truth and recognizes the Pope and the bishops as successors of Peter and the other apostles.

Loyalty to the Pope is different from idolatrous papolatry, similar to the principle that the leader or the party is always right.

Wherever there is tension between the evident word of God and the infallible interpretation on the one hand and private expressions of opinion even by the highest church authorities, the principle always applies: in dubio pro DEO.

The Magisterium serves the word of God and is never above revelation.  In any case, this is the valid teaching of the Church on the relationship between God's revelation in Christ and the Magisterium subordinate to him.

The present statement is a purely private expression of opinion which every Catholic can and should openly contradict.

John Henry Newman (1801-1890), the famous cardinal and one of the greatest doctors of the modern age, has said that even worse than the financial corruption in ecclesiastical organizations and the moral corruption of clergy and lay leaders is the corruption in matters of revealed doctrine.  That was and is the source of all grievances and scandals in church history.

What is Church sincerity or the freedom of a Christian?  The same relationship exists between the Pope and the bishops, especially the cardinals of the Holy Roman Church, as between Peter and the other apostles.  Paul opposed Peter because he had "deviated from the truth of the Gospel" through ambiguous behavior and speeches (Gal 2:14).  Jerome, Augustine and Thomas Aquinas take the side of Paul in their interpretation of the letter to Galatians and praise Peter for his humility in allowing himself to be corrected by his.

In the Catholic Church the Word of God applies - with regard to the complementarity of the sexes, marriage and family - in the definitive interpretation in the person and mission of Christ, His Son, towards the Pharisees and then and now: "Have you not heard that the  Creator created them male and female in the beginning? That is why the man will leave his father and mother and bind himself to his wife, and the two will be one flesh. "  (Mt 19, 4).

There is no right to marriage and family unless a man and a woman, according to their God-created nature, freely say to one another in their conscience and before God's face: Only you and forever - until death do us part.  Outside of legitimate marriage, according to God's will, every sexual union is objectively a grave sin - regardless of the subjective guilt, which only God knows and whose forgiveness we can trust ourselves to be forgiven at any time.

But we must not sin frivolously towards the mercy of God and instead of being justified by his judgment of Grace, we must see our sinful action confirmed by the applause of de-Christianized contemporaries.

The Catechism of the Catholic Church makes a clear distinction between pastoral care and personal care for people with a tendency towards people of the same sex and the objective assessment of homosexual acts or heterosexual acts outside of marriage that are in contradiction to God's commandment.  "Whoever says that he remains in Him must also lead a way of life as He has led him."  (1 John 2, 6).

Keeping the commandments of God is an expression of love for Him and the recognition of its healing effect on people.  Instead of meeting with people who feel confirmed by him in their attitude and wrong thinking and who show off a picture of the Pope in front of the world, the Pope should study Daniel Mattson's book and invite him to a conversation.  He is an American who has found his way from the indignity of sexual promiscuity to a celibate life in the "freedom and glory of the children of God" (Rom 8:21).

Cardinal Gerhard Müller is the retired Prefect of the Congregation for the Doctrine of the Faith.

Why I don't call myself gay: How I discovered my sexual identity and found peace

In an earlier post a few days ago, I admittedly made a semi-sarcastic remark about CArdinal Burke for not speking up for CAtholic tradition and for the erors of Frncis, particularly with regard to his teaching on same sex civil unions (a sin before God). Well, I apologize, because here is a lip I cut/pasted from another site. I was wrong. CArdinal Burke did speak up, on the same day as the great Archbishop Vigano. CArdinals O'Malley and Mueller also have condemned Francis for this, as have some USA Bishops. The list will only grow, and the outrage mount against Francis. He should either resign and slither back to Argentina, or be deposed by the faithful CArdinals in Rome. Incidently, I don't see any of his likewise radical CArdinals coming to his defense or cheering. Maybe they are in hiding? Below from CArdinal BUrke:

"Cardinal Raymond Burke was among those who criticised Francis' endorsement, accusing the Pope of sowing "error and confusion" with words that "do not correspond to the constant teachings of the Church".
"Such declarations generate great bewilderment and cause confusion and error among Catholic faithful, inasmuch as they are contrary to the teaching of Sacred Scripture and Sacred Tradition," Cardinal Burke said.
"They cause wonderment and error regarding the Church's teaching among people of good will, who sincerely wish to know what the Catholic Church teaches."
Damian M. Malliapalli

I find it refreshing for him to say this. But again, the issues are not dealt with at its roots. The "ideological right", by definition, is the resistance to attacks against the Church. The whole political spectrum was born during the French and Cromwellian revolutions against the Church and its consequences. He needs to acknowledge that. And that "Rights" for errors such as Atheism, Communism, Democracy, Feminism to Express itself is, by definition, the Left.