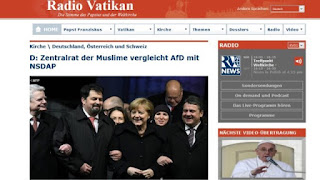 (Rome) Without a critical explanatory note and without giving the attacked AfD the opportunity to make a statement in its defense, Radio Vatican yesterday made the following  folllowing report with the accompanying photo: It shows the "solidarity" over which a very pleased  Aiman Mazyek of the Zentralrat der Muslime in Deutschland (Central Committee of Muslims in Germany) stands with  Bundeskanzlerin Angela Merkel, Bundespräsident Joachim Gauck und Vizekanzler Sigmar Gabriel after the Islamic attack against the weekly magazine  Charlie Hebdo. This is explained what the official Church in Germany thinks about the  AfD , and who it prefers as a partner in discussion.

The President of the  Zentralrats der Muslime in Deutschland has compared the politically right wing  AfD with the NSDAP. In an interview with the NDR, Aiman Mazyek said on Monday, that it is the "first time since  Hitler-Deutschland", that there has been a party that has discredited an entire religious community. And continued saying that the AfD also  existentially threatens.  The Die Alternative für Deutschland (AfD) swims on a wave of Islamophobia. This has become adopted in recent years and is even partly a topic of discussion in respectable circles. The  AfD has tried to intensify this atmosphere. "That isn't an anti-Islamic course, that is an anti-Democratic course," said Mazyek.

Its a bit much when foreigners come into your country and say they want to displace you then complain trying to prevent it is wrong. Muslims sided with the Nazis during the war. Turkey committed genocide. I would say their methods are just like the Nazis, cheap propaganda and violence. One fact they overlook. They are foreign to Europe and have no place in Europe. They are the intruders. Mohamed expelled indigenous Christians and Jews from Arabia after founding his violent sect. We too must protect ourselves from copying him. Islam is an ideology that has no place in Europe as they upset the hard won harmony of Europe.

The fuhrer was a islamiphile, besides creation of mulsim military units, support of islamist groups amd individuals in near east like iraq and the grand mufti of jerusalem, he went on record saying he wished history had given given germany islam instead of Christianity

The fuhrer was a islamiphile, besides creation of mulsim military units, support of islamist groups amd individuals in near east like iraq and the grand mufti of jerusalem, he went on record saying he wished history had given given germany islam instead of Christianity

When you get right down to it, everybody's like the Nazis.

Of course the Vatican would side with the Muslims. What else did you expect. Pope Francis lives in that little casa Santa Marta. If Muslims wanted to invade Rome and use the Lateran or St, Peter's as a mosque for the worship of Allah, I am sure Francis wouldn't care.
Damian Malliapalli

Please provide some more information. This is way over my head.

The comments to this post ask some very timely questions of which Francis has absolutely no answer.