Vaticanists on Pope Francis: "Fewer Interviews, Your Holiness. They Only Cause Confusion." 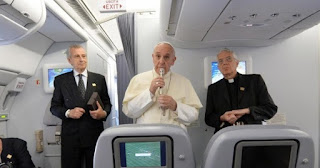 (Rome) "Interviews are not my forte," said Pope Francis at the beginning of his pontificate.  How right he was. But why then does he give so many interviews? That is what numerous Catholic observers have asked themselves in their comments since the recent flying press conference on the return flight from Mexico to Rome. Some have come to a clear conclusion and even dare to call  out to him. Their wish is: "Less interviews, Your Holiness."

HERE YOU CAN ADVERTISE »
It is contemplated with a certain melancholy that canny supporters   in the first bewildering months after the election of Pope Francis, attempted to persuade Jorge Mario Bergoglio not to give interviews. Interviews are a form of communication that would not suit Francis because of the improvised nature of the answers.

The illusion and the return flight from the World Youth Day

The Catholic world was disabused in the return flight from World Youth Day 2013 in Rio de Janeiro. Since then,  the infamous phrase  "Who am I to judge?" has become an unofficial, but more permanent and authentic motto about this pontificate.
In September of the same year, a no less controversial interview followed with the Roman Jesuit journal Civilta Cattolica and the very singular conversations with atheist Eugenio Scalfari.  Since then there has been a dizzying height of papal gushing  at each impromptu press conference in the assembly line. Thus, Francis has changed the form of communication of the Popes, who had hitherto basically waived interviews.  It is with good reason that they thought this.
Last week there were comments on a bandwidth from A for abortion to Z  for Zika virus, from John Paul II. to Donald Trump, from walls to Moscow.

The Pope speaks and contradicts himself and contradicts his own conflicting and he does not even seem to notice. Opinions differ to the latter.
It is more likely that he knows exactly what he says, and has accounted for certain reactions and effects, wherewith he wants to achieve conscious or at least tacit acceptance. While it seems true that he adapts his speeches to his audience, never the less, the coincidence of the statements is not in the game.
The subsequent corrections, semi-corrections and pseudo-corrections by Vatican spokesman, Father Federico Lombardi SJ, therefore, provide for no lack of tragedy and embarrassment. Frequently, the subsequently filed corrections were at best, half-hearted disclaimers. Lombardi, who enjoys no direct access to the Pope,  thereby has multiplied the impression,  to wish to deny something, because it contradicts the Church's teachings, but is  inhibited in this because the statement  might actually concur with the opinion of the pope, or, given a denial, tape recordings could later be presented to prove the contrary. It's a fatal situation.

The egg dance about the shocking Pope interviews with Atheist Eugenio Scalfari is unlikely to be bested. But the word  "Scalfari Magisterium' was coined, which carries the core of capitulation in itself.
Subsequently, only Lombardi  denied   informally that Francis had assured Scalfari  that "all remarried divorcees who want to be admitted to communion". At the same time Lombardi explainedthat there would be no official correction. There was also to be no denial. Absent correction, what Scalfari claimed was validated. The overriding conclusion: Pope Francis really said it just as  Scalfari announced it to the world.
The same applies to Scalfari's Pope interviews from 2013 and 2014, now reprinted in a  neatly bound  anthology by the official Vatican publishing with Pope interviews. Since then,   theologians are arguing whether and to what degree the interviews are part of the ordinary papal magisterium.

The Pope as Smoke Machine

Mists around Pope Francis  rise  and he very diligently sets off smoke grenades.
The Vatican expert Sandro Magister explained this papal procedure by using the example of the debate on the legalization of "gay marriage" in Italy: The Pope speaks and acts and sends out signals that are promptly understood by the world to be taken in a certain contradictory manner to the Magisterium. At the same time the Pope and his Adlati who act as smoke grenades to throw good Catholics in confusion and thus to lead them by the nose.
In an almost mocking way, Pope Francis said on his return from Mexico in one breath that he would not  interfere in the political affairs of Italy, and interjected himself at the same time in the political affairs of the United States.
Both times the statements targeted  in perfect focus on encouragement and praise from the same political page. In both cases, the Pope attacked the respective opposition against the ruling political left.  In both cases, the papal statements meant political interference, in Italy by demonstratively asserting noninterference with which he stabbed  Catholic families in the back, defending against their  remarkable action against the legalization of "gay marriage"  and gender ideology, in the US. by  thick headed interference against the most promising challenger to eight year long leftist government. The excommunication-shy Pope,  who has only "excommunicated" the Mafia, but figures like Emma Bonino, who  by her own admission is a child murderer 10,000 times over, and abortion-, divorce-, gender- and euthanasia advocate, he previously dubbed  "Great" and therefore put her on the same level with Pope Paul VI., excommunicated with astonishing thoughtlessness the Presbyterian and thus non-Catholic, Donald Trump from the Christian world.

Political bias does not do justice to the Petrine ministry

The political bias that   the Pope carries before himself like a flag,  might do well for his position as head of state, as Italy is the big neighbor of Vatican City, and the USA is the only remaining superpower. But governments change and tomorrow, Matteo could indeed reign in Rome,  but not Matteo Renzi of the Left-Democrats, but Matteo Salvini of the Northern League. And in the US,  tomorrow maybe Donald Trump will be sitting in the White House. Notwithstanding this: His position certainly does no good as head of the Church, as the successor of Peter and Vicar of Christ. The decisions and statements of the Pope should only  be obligated to his mission to proclaim the truth and to strengthen brothers.
Statements and actions must be measured against their consequences. Which résumé do the Pope's never denied statements about homosexuality, the divorced and remarried , on intercommunion or the Zika virus be drawn? The world reads them as a license and Catholics argue about whether the Pope had already mean it, as he had said it. The one marching resolutely forward with "papal blessing"  and the others are paralyzed in conflicts of interpretation.

The Pope interviews that "at best create confusion in all cases"

Phil Lawler, editor in chief of CatholicCulture asked about the recent flying press conference: "How dangerous was the most recent pope interview? Let me recount." Lawler's "recounting" led to a damning: The many words of the Pope would "in the best case scenario, cause confusion". Lawler's conclusion:

"The frequent public interviews of the Pope and the unfortunate list unfortunate responses have become a predictable source of confusion, frustration and even embarrassment for believers."

"Pensive Catholic leaders should use their influence to convince the Holy Father of the fact that he was right [in which he once said that interviews were not his strength] and that he is wrong now when he  uses interviews as a regular part of his public office."

The situation of the famous Vatican expert Edward Pentin from New Catholic Register isn't different.  Pentin wonders whether the controversial interviews are not too high a price to be paid, in view of the confusion that this "informal" style creates "by a pope who is not a moral theologian".
Text: Giuseppe Nardi
Image: MiL
Trans: Tancred vekron99@hotmail.com
Link to Katholisches...
AMDG
Posted by Tancred at 10:11 AM

A French Catholic Phalangist movement consider Papa Bergoglio to be a living saint. They have consistently defended him as a latter day Pius X since 2005: http://crc-internet.org/

I prefer to ascribe to him the H word!The church is being persecuted and it has started from the top.He is a heretic and Diabolically influenced.He will face God when he dies.God Bless.

Oh God in heaven, deliver us, Thy unworthy servants, from the tyranny of Pope Francis. Save Thy Holy Church, Oh Lord. Lord have mercy upon us!

Confusion is both his name and his purposeful modus operandi, Erasmus