As Bergolio Was Sent As "Brilliant, But Crazy" into "Exile"

(Buenos Aires) "Aquel Francisco" ( This Francis ) is a book which appeared last week in Argentina in the publishing house Raiz de Dos of Cordoba.  It is dedicated to the life Jorge Mario Bergoglio, particularly his "exile" in the Argentine province of Cordoba. It will bring a new "light to the time", in which  Father Jorge Mario Bergoglio  had  "fallen out of favor and been exiled" within the Jesuit Order.The priest was then referred to as "crazy and almost irresponsible". An incident that had affected not only the superior of the Jesuits in Argentina, but also  other Latin American countries and also the General house of the Order in Rome. A "series of defamations under which the Pope had suffered more than 20 years ago," write the authors of the book.

In  four years in Cordoba Pope Francis had two key moments of his religious life. From 1958-1960 he visited Cordoba in the novitiate with the Jesuits and 1990-1992 he spent time in an "exile" to which his order had  "sentenced" him.
The main source for the book is Pope Francis himself, with  two journalists from Cordoba, Javier Cámara and Sebastián Pfaffen, with whom he carried on  multiple telephone conversations. Archbishop Carlos Ñañez of Cordoba had informed the Pope about the book project, so the contact with the writing team was born.
On September 26, the authors personally presented Pope Francis in Santa Marta, a copy of the book, which is to be presented to the public in Cordoba on 9 October.

Everywhere He Went There Were "Bergoglians" and "Antibergoglians" 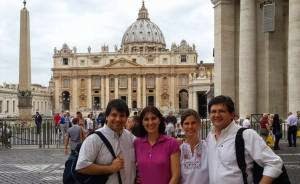 The authors, with their wives on St. Peter's Square
Cámara and Pfaffen looked  for answers as to why Bergoglio was appointed auxiliary bishop of Buenos Aires. An appointment that became the initial event of an ecclesiastical advancement that led to his election as Pope.  They also explore the question of why, wherever the current Pope appeared there were always groups of "Bergoglians" and "Antibergoglians" formed about him: "Whether his relationship to the religious, to the Argentine State to Peronism, to Marxism, related to Domingo and Eva Peron."
Asked about his "exile" in Cordoba, he did not want to speak of a "Noche oscura", a dark night, it was  "something for saints." He was "just a poor guy". For him it was more "a time of inner cleansing."

There were lonely years, thoughtful and hard for the future pope, the authors write. Bergoglio had initially experienced a "meteoric career". He was hardly an ordained priest appointed to be the novice master of the Province of the Order. At the age of only 36, he was already Provincial of the Society of Jesus for Argentina and rector of the  Order's University  of San Miguel.
Then there was a radical break.  In 1990 Bergoglio was relieved of all offices and duties and transferred  700 km away from  Buenos Aires to Cordoba. There he was for two years in a room in the religious establishment, but given "no task". He was not routinely called upon to celebrate Mass in the church of the Order, but for  Penance.
The authors write that Father Bergoglio was "demoted" from the new  Provincial leadership to Cordoba. For the exile the new provincial, Father Victor Zorzin, was responsible. He had already been Vice-Provincial under Bergoglio and did not agree with "many decisions that Father Jorge had taken both pastorally as well as in leadership." (page 176).

"Smear campaign"  in the General House in Rome

Father Victor Zorzin was Provincial from 1986-1991. He was succeeded by Father Ignacio 1991-1997 Garcìa-Mata.The authors write that there was "a smear campaign" against Bergoglio during the tenures of Zorzin and García-Mata, which assauled "across the borders of the Argentine Province of the Order and the Jesuit lines of other countries in South America and even the Generalate in Rome." This was reconstructed from a series of conversations with members of the Order.
In an interview with Radio Maria Argentina Pfaffen said that already the simple priest Bergoglio had become recognizeable for a  "special pastoral style."

Aquel Francisco, new book on Pope Francis from Argentina
The authors tell an anecdote of Father Ángel Rossi, a spiritual son of Bergoglio, who describes how much the current Pope had suffered: "The Order had related parties, who were responsible for the spread of rumors, which came from Jesuit sources, that the man who was Provincial of the Order, who was so young and so brilliant, had retired to Cordoba, because he was sick because he was crazy. When my mother died,  a layman who was very close to the religious establishment, approached me and pointed to Bergoglio, who knelt at the coffin and prayed! Pity he is crazy ' I looked at him and said: 'If this man is crazy, what am I?'"
Then, the authors propose a wide berth to the Present Time: Bergoglio as Archbishop had the impression that in some Roman dicasteries still, albeit with "low intensity" that a war had been fought against him. One of them, say Cámara and Pfaffen was "undoubtedly" the Prefect of the Congregation for the Clergy, Cardinal Mauro Piacenza.Therefore, he was one of the first to be removed in this pontificate from their office. But Francis Pope had granted them a "dignified exit". Cardinal Piacenza was "promoted" to the Penitentiary. In its place, the Pope appointed his confidante Beniamino Stella, who then rose to cardinal.

The dismissal of Cardinal Piacenza was in no way an "affront" against Benedict XVI.,  nothing is "further away from reality than that." Pope Francis had his reasons. The Congregation has completely changed its face within a year.  More than half of all the employees had been sent back to their dioceses and replaced by other priests. Apparently, according to the authors, most of them had not enjoyed the confidence of Stella, who was a "very different type" from Piacenza. Stella calls it "iron loyalty".
The idea of the radical structural intervention at the Congregatino  is still said to be a development by Pope Benedict XVI., but only just implemented under Francis. Pope Francis  may have gotten the "dissatisfaction" in the offset, because the majority of the deposed, according to the authors, it was "natural" that they had not been satisfied.
The book presents key issues and offers interesting approaches. As to their claim that their  self-interjections  bring "light" in some contexts,  the two authors are, however, not correct. The declared intention to dedicate the book to the Pope,  already makes objectivity impossible from the outset. The dual authors  provide interesting details, but no coherent and above all coherent analysis that would offer better understanding of particular importance about this pontificate. The parts on the conclave and pontificate remain at the level of obsequious and uncritical reporting. It is amazing that it just barely distinguishes the publications about the Pope from Argentina and from those in Europe, where hardly anyone knew until the evening of March 13, 2013 about Jorge Mario Bergoglio.
Text: Giuseppe Nardi
image: Sacro & Profano / Radio Maria Argentina (screenshots)
Trans: Tancred vekron99@hotmail.com
Link to Katholisches....
AMDG

When we have a Pope that "Unites the Faithful" it's either a miraculous gift from God, or the enemies have gone into hiding.

When we have a polarizing Pope... Uh oh.

These guys are full of shinola if they think being made head of the Apostolic Penitentiary after being sacked from being Prefect of the Congregation for the Clergy is a promotion (a la +Mauro Piacenza).

Let them peddle their Latin American horse manure somewhere else.

Whatever the demons Bergoglio wrestled with during his years in 'exile', I think the demons won.