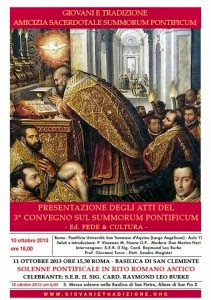 (Rome) to a scandal occurred in Rome during the presentation of the conference proceedings on the Motu Proprio Summorum Pontificum on the 10th of October at the Pontifical University of Saint Thomas Aquinas (Angelicum) during proceedings of the presentation of collected papers of the Third Conference on Summorum Pontificum, which had taken place in 2011. Raymond Cardinal Burke, Professor Giovanni Turco and the Vaticanist Sandro Magister three speakers were present.

Cardinal Burke recalled in his address to the "real reasons" why Pope Benedict XVI. in 2007, issued the Motu Proprio Summorum Pontificum: "to guarantee the right of all believers for this Rite, and for mutual enrichment between the new and the old." We could understand the comments as a criticism of Pope Francis, in his Civilta Cattolica interview of the motives of Benedict XVI. downplaying the granting of Summorum Pontificum and trying to reinterpret it.

The Cardinal also recalled Benedict's suffering, which he expressed in his letter to all the bishops, with the declared purpose and meaning of the Motu Proprio. A condition that was related to the liturgy and with the changes. An affliction that I witnessed and felt even in small and large seminar on the cardinal.

Giovanni Turco, Professor of Political Philosophy talked about the importance of Summorum Pontificum as the right of every believer "to have the non-suppression of the traditional rite." He also spoke about the over hasty and sloppy abolition of Latin and its translation into the national languages, pointing to translation errors corresponding in real doctrinal error.

Finally, Sandro Magister gave his contribution as a lecture on which Katholisches.info already reported (see separate report Pope Francis and the Liturgy - "Pure Functional Access" Reservations to Tradition, weakness in the knees before the Lord ). Master analyzed in a critical manner, the previous decisions of Pope Francis in the Liturgy: The ban for celebration in the old rite by the Franciscans of the Immaculate, the dismissal of all five consultants for the Office of Papal Liturgical Celebrations, who were close to the liturgical understanding of Benedict XVI., the refusal to genuflect in the Holy Mass at the words of consecration, although from papal Mass to papal Mass always newly master of ceremonies Guido Marini always included the two relevant points and finally the halting by CDF, that they no longer check the bizarre special forms in the Mass of the Neocatechumenal Way, as Benedict XVI. had ordered. Magister has also expressed the opinion that the Pope is "friendly" to everyone, "except with the traditionalists."

"Scandal Currently The Dominant Characteristic of Climate in Rome"

The lecture finally came to a scandal. Magister so openly expressed his criticism of Pope Francis, that Cardinal Burke and Archbishop Pozzo had to leave the room. "The response of Cardinal Burke and Archbishop Pozzo is indicative of the currently prevailing climate in Rome," the website Chiesa e Postconcilio (Church and Post-Conciliar). "Was it because of the time for both of them or was it simply a precaution, because of the polite but harsh criticism by Magister of Pope Francis? The withdrawal of a Cardinal during a major event is something glaring. All interpretations are allowed, "said the Spanish Catholic blogger Francisco de la Cigoña.

H. E. Cardinal Burke and Archbishop Pozzo owe an apology and explanation for their very rude behavior. We fatihful catholics the world over want to know if their glaring incivility indicates that they will faithfullly follow Bergoglio into the new Religion he proclaims, or will they take a stand for the faith at the risk of their careers?

I am sure that Catholic men everywhere, want to know the answer...

I would say yes to that if he thinks there is "enrichment" to be found in a the Novus Ordo service.

They have vocations, not careers. Leastwise that is what they are supposed to have.

Are we Catholic or are we pope worshippers? To those who have their heads stuck in the sand or low informed Catholics, a pope never has the right to change the dogmas of the Catholic Faith. So far nothing but wicked and poor choose of words have been promoted by this Freemason pope. Not to fight against error is to accept it.

Cardinal Burke and Archbishop Pozzo are faithful Bishops. They were put in an unnecessarily embarrassing position by Magister; and, as graciously as possible, quietly removed themselves.

If anyone deserves an apology, it is Cardinal Burke.

Tossing the universal language of Latin for the multitude of vernaculars = Babel. Slow or "hasty", it is still babble. But that is hardly the issue with the perversion of the Holy Mass The fact is that the Novus Ordo does NOT do what Christ intended. It does what Cranmer intended.

It isn't a matter or pope worshipping but Martin Luther worshipping. Luther defied Church Law and those who loved the way he tickled their ears followed him out of the Church and into Hell.

To call the pope a freemason and other names is NOT pleasing to God! In spite of personal opinions, Pope Francis is the Vicar of Christ on earth and there must be respect for the office. Cardinal Burke could hardly be seen to approve of pope bashing. He is not a 'neo-con' but one of the most traditional friendly prelates we have in Rome. He is getting much criticism from the 'progressives' himself.

For insults to Jesus christ by the present 'pope' no one walks out. It would not be politically correct. Every one of us will soon have to decide whom it is that we serve. Politically correct won't cut it.

You had better read up on the prophecies of APPROVED apparitions in the Catholic Church. To quote Deitrich von Hildebrand, 'Our obedience must be to truth, and those in authority who preach other than the truth lose their authority.'

Anon @7:02, I was thinking the same thing. How wonderful it would be if they were that delicate and sensitive to offenses against Our Lord!

I just now had some eggs. I decided to add some cyanide to my eggs for mutual enrichment. I'm now feeling strange....

Burke and Pozzo deserve an apology because they have done more to spread devotion to the Latin Mass then many armchair "catholics" with computers.

I go to the Novus Ordo every day and truly am very much enriched. I go to the EF once a week as well. It is the Body of Christ that enriches us, and that you get at any Mass. To say one is not enriched at the Novus Ordo seems to me blasphemous.

How exactly does the protestanized NO Mass enriches the TLM?? Fact: It doesn't.

I am against most of the commentators here. One does not attack at this level the Pope in the presence of two Cardinals, one of whom is the most Trad Cardinal from the States. The apologies should come from those who organized the speeches. These type of discussions happen in prayerful and small groupings of those who are really in a position to do something about changing things.

The naivete of those attending is astounding. It is one thing to criticize papal comments and another to have a formal meeting doing such.

The criticism by some here of Pope Francis and the Novus Or do is sad and unchristian.

St. Thomas wrote: "if the faith were endangered, a subject ought to rebuke his prelate even publicly," charitably, of course. See this.

Bergoglio will lead the Catholic Church further down the road to disaster. I have no time for him.

Bf. Williamson (and Archbf. Lefebvre before) pointed correctly to that difference of this two religions.
But also Paul VI himselfe spoke about this two religions - and admitted, that with Vat. II there was no clash and conflict anymore between those two but that they ar now in harmony....

Rude?! What in the world are you talking about? The Pope was being openly criticised in the the presence of Cardinal Burke and Archbishop Pozzo. I don't think there is anything wrong with their gesture of showing their disappointment to what Magister is doing.
It was Magister who was not acting properly.

I think some people here are more concerned with the Latin Mass than anything else in this world.

I can think of few things more worth defending than the Immemorial Mass of All Ages.

Alan Aversa, Yes. And a promoter of the Jewish-Catholic thing.

I wonder if Cardinal Burke and Archbishop Pozzo only walked out as a precaution. Maybe they are only playing the Bergoglio game. Playing his game in order not to get on his bad side. Burke and Pozzo are two great Traditional Churchman, so I think its obvious that they have got to play their cards right. Christ did tell us to be cunning as serpents.

Pope Francis has bad knees. What do you expect him to do?

Stop breaking and changing Church practice and traditions. Stop molding the Chair of St. Peter Vicar of christ into his own image and likeness and mold himself into the image and likeness of a vicar of Christ. Funny he has no problems kneeling elsewhere, except before his God. Please no more excuses! Could this be the Pope prophezised by St. Francis of Assisi?

Prophecies which came true about this Pope
www.thewarningsecondcoming.com

He is The False Prophet and he will change the Sacraments, the text of the Holy Mass. Soon you will not see Christ's images in catholic churches. Read the prophecies, as they are coming true. Resignation of Pope Benedict has been prophecised exactly 1 year before his resignation.

goggy/berGOGlio is scumbag mentioned in REV 13 i have no respect for any man who willfully drags his fellow men to HELL follow this fool in Rome and you will end up following him into antichrists one world religion dont make same mistake of humanity in pasts recognise signs of end times ! God bless and have mercy on all of us in this world .

Go to the web site "JungleWatch" to see the trouble a tiny island in the pacific is having with the Neocatechumenal Way.