Return of the Communion Rail -- Experiences of a Priest 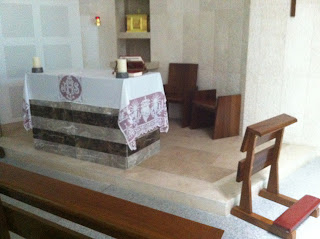 (Madrid)  Don Jorge Gonzalez Guadalix, priest of the Archdiocese of Madrid, has reported on his blog De profon cura about his positive, recent experience with the reception of Communion.  The starting point was a question from  commenters on his blog, who wanted to know and how things were ordered in his parish, and if  there was a possibility receive Holy Communion kneeling also.

The priest saw on the one side, Pope Benedict XVI's example, who has only given Communion kneeling since 2008, at the same time however he has had practical difficulties and a "fear",  that he would be "foisting" something on the faithful.   Only "a few" of the faithful knelt down to receive Communion.  The priest did not refuse them Communion on the tongue but they had to kneel on the floor.  "For older people it's not something that's possible", as he himself writes.

After long hesitation, he could bring himself both i the chapel, where Holy Mass is said on weekdays, and in the parish church, he placed a kneeler to allow the faithful to receive Communion kneeling.  On weekdays in his parish, two Masses are celebrated on Sundays and on Holidays, four.

The pastor gave neither advertisement nor solicitation to use this form of receiving Communion.  After a month, he summed up his first experience:  "virtually all believers" kneel themselves down during weekday Mass at 7:30.  At the later weekday Masses, fairly half.  On Sunday, however, there are less.  "I think this is largely because many of the people who attend Sunday Mass are more agile."

In his report the priest gave the following conclusions:

The installation of a kneeler, which enabled the faithful to communicate kneeling, didn't "complicate" in any way the reception of Communion in either form.

The "freedom" is sufficient to give the faithful room, with the concrete case of the reintroduction of the kneeler,  and the faithful return to the practice of receiving Communion kneeling.  The "faithful are growing" and they will know what they have to do.  The priest did not wish to rise above the norms of the Church, nor could he force the hand or Communion on the tongue.

"Pope Benedict XVI's example, who has only given Communion kneeling since 2008,"

http://rorate-caeli.blogspot.com/2010/11/reform-of-reform-apparently-put-on-hold.html Are there other instances that are unknown only because they are not so high profile?

Sometimes is snows in summer, too.