Edit: I’ll bet Greydanus and Shea love this! Shea thought Cuties was great. Some joking aside, I’m thinking that many institutions in the West, in one way or another, are promoting the sexualizing of children as a means of political power whether it’s the “Mental Health Community,” Republican Party, public education, the media entertainment complex or even the army of the globohomo. Left-leaning churches are only part of the equation. Take a close look at the Franklin Scandal where prominent politicians were encouraged to molest children. The latest attempt at changing hearts and minds is this play, “Downstate” which attempts to offer sympathy for child raping degenerates, by Episcopalian Bruce Norris, and it has received a positive review by a New York Post critic to the outrage of the Neoconservative news combine. I’m sure they’ll get it wrong somehow.

Who’s responsible for this state of affairs anyway? The Post drama critic, Peter Marks is, of course, Jewish. Unfortunately, Marks’ tweets are now protected. It reminds me of the time when a Jewish pederast put out a video with the San Francisco Gay Men’s Chorus. It’s not surprising that a Jew who advocates for more diversity in Judaism is also pushing the Overton Window to the Left for acceptance of these deviants and their twisted  predilections for children. Jews were in the vanguard for normalizing sexual relationships between people of very different ages.

But they have a little help. This play is just the latest in a long line of productions over the years which play with themes of intergenerational grooming, one of which was reviewed positively and breathlessly by he-man Movie Reviewer, Stephen Graydanus.

It’s almost as if these people and those who serve them are trying to engender degeneracy for the sake of their own disordered appetites and moral failures. 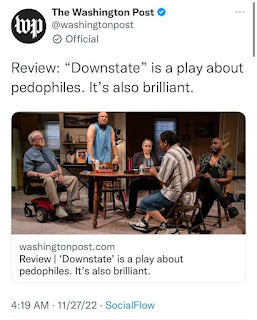