Fra Matthew Festing, who was forced to resign by Pope Francis in 2017, will be buried according to his wishes in the former Grand Masters Church on the island of Malta.

(Valletta) The 79th Prince and Grand Master of the Sovereign Order of Knights and Hospitallers of St. John of Jerusalem of Rhodes and of Malta, Fra Matthew Festing, who died on November 12, will be the thirteenth Grand Master who will be interred in the Co-Cathedral of San Gwann in Valletta,  the capital of Malta.

The former grandmaster would have turned 72 on November 30th.  From 2008 to 2017, Fra Matthew Festing, a descendant of old English nobility, was the head of the oldest knightly order in the world, which can soon look back on a thousand-year history.  It was located in Malta, the former seat of the order, which gave the Catholic branch its current name.  On November 4th he attended the solemn profession of Fra Francis Vassallo there.  Fra Vassallo, the former governor of the Central Bank of Malta (1992-1997), joined the Order of Malta in 2000.  After the death of his wife in 2013 - Vassallo is the grandfather of eight grandchildren - he followed his religious vocation and made the simple and now perpetual vows in 2015.  The family of the Vassallo de Vassallo has been documented in Sicily since around 1230 and in Malta since 1320.

November 4, 2021, one of the last pictures: Fra Festing greets Archbishop Charles Scicluna in the co-cathedral

A few hours after the solemn ceremony, Fra Festing fell into a coma from which he never woke.  One of the last pictures of him shows him in a wheelchair in the co-cathedral, greeting Msgr. Charles Scicluna, the Archbishop of Malta, who has also been Assistant Secretary of the Congregation for the Doctrine of the Faith since 2018.

The former Grand Master's health had deteriorated noticeably since he was forced to resign on January 28, 2017 by Pope Francis as the culmination of an unprecedented intrigue.  The electoral body of the order had elected him for life.

Fra Festing then retired into exile in Northumberland, his birthplace near the Scottish border.  He was too shaken by the intrigue, the unjust exclusion and, above all, the actions of Francis, for which the true and honest Grand Master was not prepared on that winter day 2017, when he was received by the Pope in audience.

The “fault” of the Grand Master

The only guilt the 79th Grand Master had incurred was his determination to renew the Order in keeping with its traditions and essence and his naive intention to shed light on some financial matters.  These concerned a dubious cooperation between the order's own international aid organization and UN agencies (keyword: contraceptives) and a financial transaction that concerned the order.  Specifically, it was about a hundred million euro legacy of which the French nobleman Jehan du Tour had bequeathed a third to the order.  But no one in the order had really heard of this nobleman before.  In addition, a small group tried to gain access to the assets.  When the Grand Master found out about the money belatedly, he expressed the suspicion to confidants that it might be a form of money laundering.  So he wanted to clarify and filed a complaint.  In both cases he also initiated internal investigations by which someone evidently felt so threatened that an intrigue began that brought down not only the praiseworthy intention of the Grand Master, but also himself. 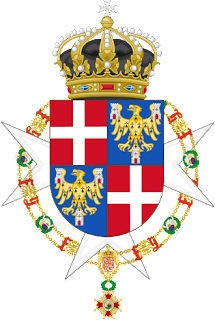 In one of the few interviews Fra Festing gave, he described his dismissal:

“I was summoned by Pope Francis and he asked me to resign as Grand Master.  He was polite, even if he didn't give me an explanation for his request.  I can guess that the Holy See found me an obstacle.  I can't find any other explanation.  As a good Catholic and a religious, I have accepted the will of the Pope.  I am obliged to obey.  It seemed to me that the Holy See was not satisfied either with my insistence on orthodoxy or with my desire to examine the finances of the Order.  For some, I was probably a form of threat. "

When asked why he signed the resignation letter, he said:

“I have a clear conscience before God and myself.  When asked to resign, I had no doubt what to do.  I am a former soldier who is used to doing what my superiors tell me.  When the Pope informed me that he wanted my resignation, I accepted that without questioning his decision. "

Internal battles between a “German” current under Grand Chancellor von Boeselager and an “English” current under Grand Master Fra Festing led to a palace conspiracy against the latter.  Events rolled over after Fra Festing removed Boeselager from all his offices at the beginning of December 2016.  The dismissed Grand Chancellor turned to the Vatican for help that was granted to him.  Cardinal Secretary of State Pietro Parolin stood behind the German barons and Francis followed him in them.  The Grand Master was dropped.

In the official statement of the Vatican after Festing's resignation, the Holy See expressed "appreciation and gratitude for the feelings of loyalty and devotion to the Successor of Peter".  The reality was different, however.

The internal dispute between the Grand Master and the subordinate Grand Chancellor concerned questions of ecclesiastical moral teaching and finances of a very tangible nature.  The Protector of the Order, Cardinal Raymond Burke, who had advised the Grand Master, let it be known shortly after the fall of Festing that it was also a question of whether and what influence Freemasonry had on the Order.

After Festing's resignation, Cardinal Secretary of State Parolin ordered that Boeselager be reinstated as Grand Chancellor and that all decisions of the Grand Master and the Order's government since Boeselager's dismissal are null and void.  That was a lot of stuff, because the Cardinal Secretary of State has no legal title to make government decisions in the Order of Malta, which is a sovereign subject of international law.  However, through the parallel level of religious obedience that binds every Catholic, the Holy See felt empowered to intervene and created a fait accompli.

A family of soldiers and recusers

After a military career, Fra Festing entered the world's oldest knightly order in 1977 and took her solemn vows in 1991.  He was elected Grand Prior of England and finally in 2008 the 79th Prince and Grand Master.  His ancestors were high-ranking military officers for many generations: his father was a field marshal general, his grandfather a brigadier general, his great-grandfather a major general, etc. Fra Festing saw himself in this defensive tradition in the Order of Malta, albeit on a different level.  The knights of the order had defended the faith with the sword for 700 years.  Since then they have acted as hospital orders, as was the case more than half a century before the beginning of the Crusades.

On his mother's side, he came from an old family of recusants who rejected the Anglican creed (Latin: recusare, reject, reject) and have always remained Catholic.  The Act of Uniformity of 1558 imposed penalties and discrimination on Catholics in England, in some cases even the death penalty, which was not repealed until 1828 and, in the last few elements, not until the 1920s.

Fra Festing's most famous direct ancestor is the blessed Sir Adrian Fortescue, a Knight of Malta who came from one of the oldest families in England.  His great-uncle was the legal scholar Sir John Fortescue (1393-1476), who in 1442 became Chief Justice of the Royal Court of Justice of England and Wales and is considered a founding father of the English constitution.  Anna Boleyn, the first of Henry VIII's illegitimate wives, was his cousin.  He himself was beheaded on July 9, 1539 for his Catholic faith in the Tower of London, because he had refused to take the oath of supremacy on King Henry VIII, who had fallen away from Rome.  He was declared a martyr and beatified by Pope Leo XII.

Another distant relative is the Catholic priest and polymath Adrian Knottesford Fortescue (1874-1923), who came from an Anglican clerical family who joined the Anglo-Catholic Oxford Movement and eventually converted to the Catholic Church.  The son entered the Scottish College in Rome, studied Catholic theology at the University of Innsbruck and was ordained a priest by Prince Bishop Simon Aichner in Brixen in 1899.  In the following years he passed rigorous exams in a variety of disciplines and was awarded a doctorate in each case.

The grave of the Grand Masters in Valletta 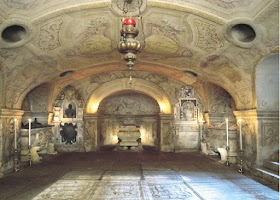 The Valletta Co-cathedral is dedicated to St. John the Baptist, who is called San Gwann in Maltese.  The Baptist is the patron saint of the Order of Malta, which was known as the Order of St. John until the Reformation.  In order to distinguish itself from the Protestant branch, which stuck to the name of the Order of St. John, the branch that remained Catholic was named after the Mediterranean island of Malta, which was the seat of the Grand Master from 1530–1798.  The present co-cathedral was built between 1573 and 1578 as the main church of the order.  Today it serves as a secondary cathedral for the Archbishop of Malta.

During the 269 years of the order's rule - the archipelago had been left to the order by the Habsburgs after the order had been driven out by the Ottomans from Rhodes - twelve grand masters were buried in it.  Eleven in the crypt, including Fra Philippe Villiers de L'Isle-Adam (1521–1534), the 44th Grand Master who moved the Grand Master's seat to Malta, and Fra Jean de la Valette (1557–1568), the 49th Grand Master,  who threw back the Turks in the Great Siege.  One, Fra Nicolas Cotoner, 61st Grand Master 1663–1680), is buried in the nave.  It was Fra Festing's wish to find his grave by their side.  The last Grand Master to be buried in San Gwann was Emmanuel de Rohan-Polduc, who ruled as the 70th Prince and Grand Master from 1775 until his death in 1797.

Several hundred knights of the order are also buried in the former convent church of the Grand Master’s Palace.  Many of the coats of arms are embedded in the floor of the nave, which is considered to be one of the most precious in the world.

In 2018 Fra Giacomo Dalla Torre del Tempio di Sanguinetto was elected as the 80th Grand Master as Festing's successor.  He died in April 2020 and was buried in the church of Santa Maria del Priorato on the Aventine, the church of today's Grand Master's seat in Rome.  Since then, Fra Marco Luzzago has headed the order as the Grand Master Governor until the 81st Prince and Grand Master was elected. 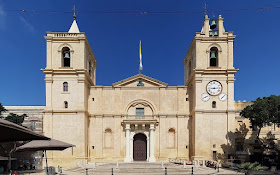