The Vienna Minorite Church, one of the most important and oldest churches in the city, has become the property of the Society of Saint Pius X and has been used by them since yesterday.

The Society of St. Pius X. (FSSPX) has announced that it has become the owner of the famous Minorite Church in the Inner City (First District) in Vienna.  The Society will be able to take over this church, officially called the Italian National Church of Our Lady of the Snows, for its sole use on June 3, 2022, the anniversary of its donation to the Italian community by Emperor Joseph II on June 3, 1784.

The importance of this message does not escape the Catholic historian.  The Minoritenkirche is not only one of the most beautiful and oldest churches in Vienna, but was also the heart of the Catholic resistance against revolutionary ideas between 1780 and 1815.  At that time, Jansenism, Gallicanism and Enlightenment - different and heterogeneous forces, which, however, brought together their hatred of the Roman Church - combined their efforts to destroy the Christian religious and social order in the shadow of the Masonic lodges.  Father Nikolaus Albert von Diesbach (1732–1798), a former Swiss officer who had belonged to the Society of Jesus before its suppression  (1773), founded an organization in Turin between 1779 and 1780 under the name Amicizia Cristiana [Christian Friendship] wished to oppose this subversive project by fighting it with its own weapons: the dissemination of writings and the secrecy with which the members of the association surrounded themselves 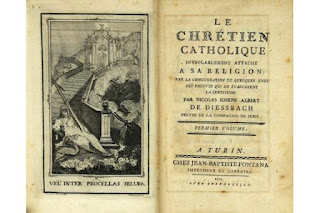 Vienna, the capital of the Holy Roman Empire, ruled over by Joseph II of Habsburg-Lothringen (1765–1790), was at that time the European city in which the network of contacts and errors of the Church's enemies was most closely knit.  "In Vienna, which had become the capital of anti-curialism in the second half of the 18th century, Freemasonry and Enlightenment, Jansenism and liberal Catholicism sometimes seem to merge in one and the same person in order to wage the same struggle against the same opponents," writes  Historian Carlo Francovich in his History of Freemasonry in Italy. 2

As Pope Pius VI.  (1775–1799) decided in 1782 to travel to Vienna as “peregrinus apostolicus”, Father Diesbach, accompanied by his most important colleague, the venerable Servant of God Pio Brunone Lanteri (1759–1830), made contact with him a month in advance to plan the distribution of pamphlets for the reception of the Pope by Austrian Catholics.  The success of the trip was so great that Diesbach decided to move the center of his apostolate from Turin to the Habsburg capital.

In Vienna, the Catholic resistance had its center in the Minoritenkirche, whose prefect was Baron Joseph von Penkler (1751-1830).  Penkler, whose soul guide Diesbach and later Lanteri, had received his training from the Jesuits at the Theresianum in Vienna and had maintained close relationships with some leading figures of the Jesuit order such as the court astronomer Father Maximilian Hell (1720–1792) and the theologian Luigi Virginio (1756–1792).  He became the rector of the Minorite Church in 1805.

This church was also a point of reference for a group of Italian exiles, including the Marchesa Maria Magdalena Capponi Frescobaldi (1771-1839), founder of the Passionists of St. Paul of the Cross, who also belonged to the Amicizia Cristiana.  Through Duke Ludwig Eugen von Württemberg (1731–1795), Diesbach also established close ties to the imperial court in the Austrian capital: he obtained the abjuration and became the spiritual advisor of Princess Elisabeth of Württemberg (1767–1790) and took care of the education of Archduke Franz, later Emperor Franz II, who married Elisabeth, the first of his four wives, in 1788. 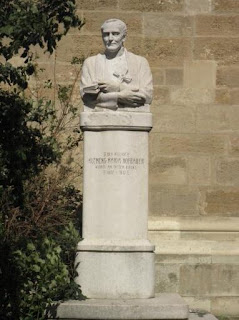 Hofbauer memorial at the Minoritenkirche

When Joseph II died in the winter of 1790, Diesbach presented the new Emperor Leopold II with a memorandum that was a veritable “manifesto” of cultural and political action.  The historian Ernst Karl Winter (1895–1959), who was the first to recognize its importance, wanted to recognize in it the lines of the state romanticism that was to form the model of Austrian political Catholicism in the 19th century (Romantik, Zeitschrift für Schweizerische Kirchengeschichte, 21 (  1927), pp. 81-102).

Finally Diesbach met the later canonized Redemptorist Klemens Maria Hofbauer (1751-1820) through Freiherr von Penkler in Vienna, whose philosophical and theological training he completed.  Hofbauer, to whom Diesbach owed his knowledge of the works of St. Alfonso Liguori, joined the Vienna Christian Friendship and later founded a similar association in Warsaw, the Oblates of the Most Holy Redeemer.  St. Klemens Maria Hofbauer, today's patron saint of Vienna, was chaplain of the Minorite Church from 1808 to 1813, which is why a memorial was erected in his honor in front of the Antonius Chapel there.

Shortly before the turn of the century, on January 2nd, 1799, the "Wiener Zeitung" reported the death of "Nikola Freyherr von Diessbach, secular priest and ex-Jesuit on December 22nd, 1798 at the age of 60 in the city, Seizergasse 460".  The death of the former Jesuit was shrouded in mystery: his students led him back to the consequences of an attack on his way back from Prague to Vienna, where he had gone in October 1798 to meet with Archduchess Maria Anna (1770–1809), the daughter of Emperor Leopold  II. to discuss plans for a new congregation for women in the Ignatian spirit.  The Archduchess, together with her two cousins ​​Maria Luisa and Maria Leopoldine, formed the first nucleus of the Dilette di Gesù (The Beloved of Jesus), an institute from which three religious congregations were to emerge: the Society of the Sacred Heart of Jesus (Sacré Cœur Sisters) of  Magdalena Sophie Barat (1779–1865), the Institute of the Sisters of the Holy Family by Leopoldina Naudet (1773–1834) and the School Sisters of Agathe Verhelle (1786–1838). 3

Father Diesbach finally found his final resting place in the romantic cemetery of Maria Enzersdorf near Vienna, where the remains of his friend Maximilian Hell were already lying.  His Viennese students Virginio, Penkler and Hofbauer were to be buried next to him.  After his death, the legacy of Christian Friendship was renewed by Hofbauer, who after his return to Vienna in 1808 gathered a group of respected converts, including Friedrich Schlegel (1772–1829) and his wife Dorothea Veit née Mendelssohn (1763–1839) , Adam Heinrich Müller (1779–1829), Zacharias Werner (1768–1823), Johannes (1790–1854) and Philipp (1793–1877) Veit, sons of Dorothea Schlegel.

The Hofbauer circle exerted considerable influence on the Austrian Catholic restoration, particularly during the Congress of Vienna (1814/1815).  The historian Rudolf Till describes 1808 as the decisive year for this Catholic restoration.  In August of that year Friedrich von Schlegel (1772–1829) arrived in Vienna, in September Hofbauer: “Schlegel”, writes Till, “was the head, the spirit, Hofbauer was the heart of this circle” (Rudolf Till, Hofbauer and His Circle, Herold, Vienna 1951, p. 68).

In 1810 Friedrich von Gentz ​​(1764–1832), secretary and most important collaborator of Prince Metternich, transferred the editing of the Vienna newspaper “Der Österreichische Beobachter” to Count Joseph Anton von Pilat (1782–1865), who was in close contact between the Chancellery and the Hofbauer  Circle.  The patroness of this circle was Princess Karoline Auguste of Bavaria, who married Emperor Franz I (1792–1835), a widower of three in 1816.  Caroline was to be surrounded by the party of the “pious of the court”, whose religious and political model was that of Father Diesbach: the ideal of a monarchy that freed itself from all remnants of Josephinism and returned to the medieval and counter-Reformation sources of the dynasty.

The Minorite Church was at the center of these events.  The handing over of this church to a religious community that fights against progressivism with the same force with which the Viennese Catholics fought against the errors of the revolution two centuries ago appears to be symbolic.

* Roberto de Mattei, historian, father of five children, professor of modern history and the history of Christianity at the European University of Rome, President of the Lepanto Foundation, author of numerous books, most recently in German translation: Defense of tradition: The insurmountable truth of Christ, with  a foreword by Martin Mosebach, Altötting 2017 and The Second Vatican Council.  A previously unwritten story, 2nd exp.  Edition, Bobingen 2011.

Books by Prof. Roberto de Mattei in German translation and the books by Martin Mosebach can be obtained from our partner bookstore.

Or his book on Pius V available at Amazon.com. 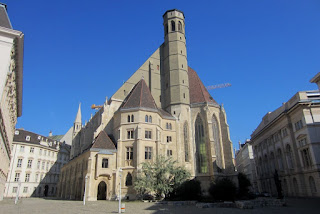 The Minorite Church, which dates back to 1224, is in the immediate vicinity of the Federal Chancellery and the Hofburg.

1 Cf. Roberto de Mattei: La Biblioteca delle “Amicizie”: repertorio critico della cultura cattolica nell'epoca della rivoluzione 1770–1830 (The library of “friendships”. A critical repertory of Catholic culture in the age of the revolution 1770–1830),  Bibliopolis 2005. P. Diesbach, who came from one of the noblest and richest families of the Reformed Bernese patriciate, had converted to the Catholic faith.

Bravo for SSPX and the church in Vienna "our lady of the snows". Keep in mind this refers back to the Liberian Basilica of St. MAry Major in Rome where our lady of the snows appeared to St. Pope Liberius (and yes, he is a saint). Everyone should stop calumniating this great saint. Please read about him: http://www.papastronsay.com/resources/PopeLiberius/Rohrbacher.htm
Pope St. Liberius, pray for the SSPX.