There's a Site That Celebrates Evil Architecture Like the Modernist Monastery 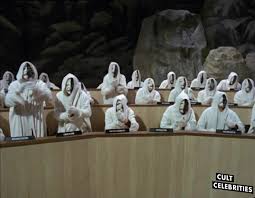 Edit: I had to look at this a couple of times.  I blinked.  There is actually a site which is trying to save Brutalist architecture.  #SOSBRUTALISM.


#SOSBRUTALISM #SOSBrutalism is a growing database that currently contains over 1,800 Brutalist buildings. But, more importantly, it is a platform for a large campaign to save our beloved concrete monsters. The buildings in the database marked red are in particular jeopardy. This is an unprecedented initiative: #SOSBrutalism is open to everyone who wants to join the campaign to save Brutalist buildings! It is a powerful tool that allows fans of Brutalism to communicate with one another across Facebook, Twitter, Instagram, Tumblr etc. You can follow our social media feeds below.

Interestingly, they are taking note of Brutalism's "bloody mindedness".


…what characterises the New Brutalism…is precisely its brutality, its je-m’en-foutisme, its bloody-mindedness. Reyner Banham, 1955


#SOSBrutalism has also led into an exhibition which has been jointly organized by the Deutsches Architekturmuseum (DAM) and the Wüstenrot Stiftung. It was on display at the DAM, Frankfurt am Main, Germany, from November 9, 2017 until April 2, 2018. With 47,000 visitors it was a great success, including a wide press coverage in print, radio and German prime time TV news. “SOS Brutalism – Save the Concrete Monsters!” is currently travelling. The first venue was Vienna with a new chapter on Austrian Brutalism: Architekturzentrum (Az W), May 3 until August 6, 2018. Stay tuned for future updates.


They even wrote a review of the Abbey Church at Saint John's Abbey in Collegeville.  What other kind of architecture would you expect to be associated with a den of vampires? 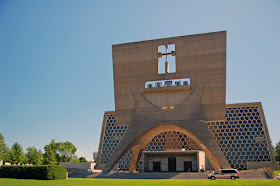 Collegeville, Minnesota, USA, Show on map #REL #CastInPlaceConcrete #FoldedPlate #North America
This edifice is part of a large Benedictine monastery and consists of a trapezoidal nave and a bell tower the shape of which is itself reminiscent of a bell. With the sculptural use of exposed concrete on a monumental scale, the church is considered a key item in Breuer’s oeuvre (Breuer’s first religious building), and in North American church architecture per se. Here, for the first time, there is a massive, rough-walled interior and thereafter the folded plate walls became an ever more prevalent feature. In Europe, there is nothing comparable at that time, either.