“At the Greek-Turkish border, there were again incidents at the Kastanies / Pazarkule crossing. A group of around 200 migrants felled a tree on Sunday evening and damaged the border fence on the Greek side,” reports Oe24. 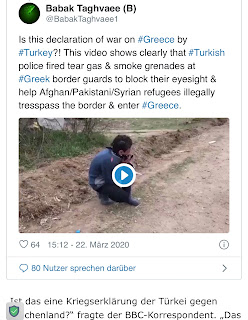 "Is that a declaration of war by Turkey against Greece?" Asked the BBC correspondent. "The video clearly shows that Turkish officials fired tear gas and smoke grenades at Greek border guards to help Afghan, Pakistani and Syrian migrants cross the Greek border."

“On Sunday, Turkish police officers in Evros shot over 1,000 tear gas grenades at Greek border guards in the evenings. This is an attack on the EU's external border. Where's the reporting on that?” Said Petr Bystron, AfD chairman in the Foreign Affairs Committee. “It is always astonishing that the public service broadcaster wants to convince us that the illegal migrants are primarily children and families - although recordings circulating almost simultaneously on the Internet showed that the rush on the Turkish-Greek border was above all, done by young men from Pakistan and Afghanistan and not by families with young children.”

"The Federal Government continues to violate Article 16a of the Basic Law, the Schengen and Dublin rules and the Residence and Asylum Act through the additional admissions. The - purely verbal - ministerial decree of Thomas de Maiziere from 2015, according to which everyone should be admitted to Germany, must be lifted immediately by Interior Minister Seehofer and the effective border control restored,” said Bystron.