(Jerusalem) A part of the Mount of Olives in Jerusalem, a place that played an important role in the life of Jesus Christ, has become the property of the Neocatechumenal Way.

The Mount of Olives, a range of hills east of the Temple Mount, plays an important role in salvation history and is therefore of particular importance for Christianity and Judaism. The prophet Zechariah announced that the Messiah would enter Jerusalem via the Mount of Olives and hold the Last Judgment in the Kidron Valley at the foot of the Mount of Olives. That's why there is a large Jewish cemetery there.

As the Gospels testify, Jesus moved across the Mount of Olives in Jerusalem and then prayed before his capture in the garden of Gethsemane at the foot of the ridge. From the top of the Mount of Olives on the 40th day after Christ's resurrection His Ascension took place. 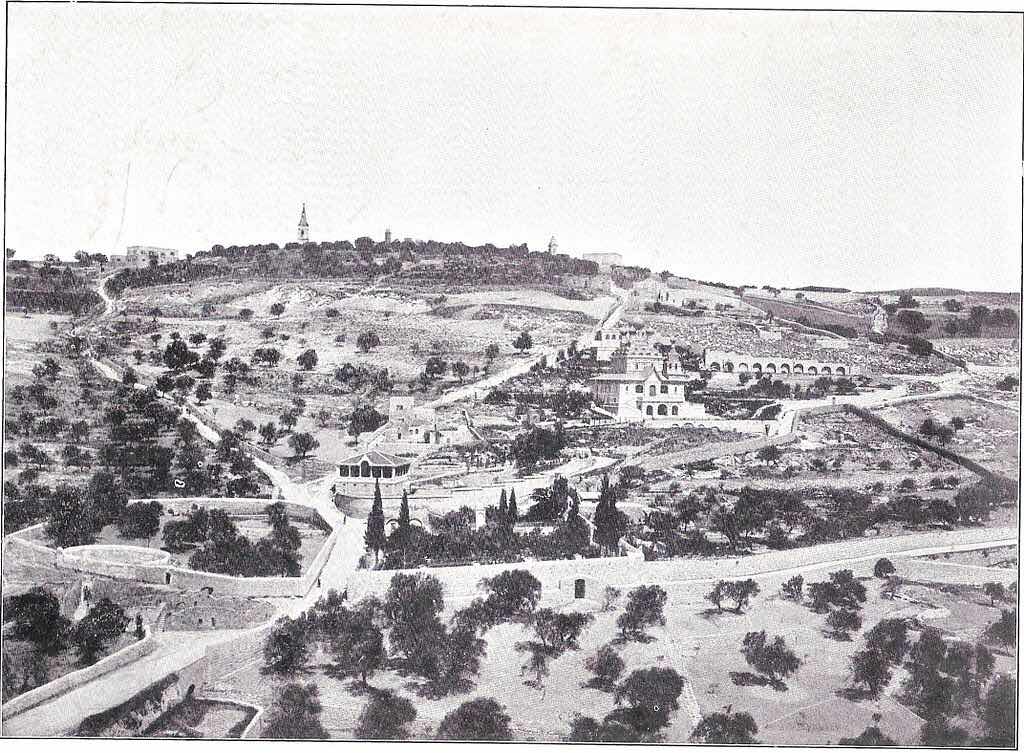 The Mount of Olives around 1899. At that time there were about 30 percent Christians in the Holy Land. Today it is less than three percent.

The Neocatechumenal Way was founded in 1964 by Kiko Argüello and Carmen Hernández in Spain and is one of the so-called new spiritual communities in the Catholic Church. The movement is popular and has a high degree of mobilization, as demonstrated by the Family Days in Italy, which protested for the protection of children, against abortion and against the introduction of gender ideology in schools. Controversial are Judaizing elements and the handling of the liturgy: the Mass celebrations in some halls instead of in churches and on Saturday evening (anticipated Mass), bypassing Sunday.

As reported by the EFE press agency and the daily La Vanguardia, Panama-based Catholic Foundation, Domus Jerusalem purchased a 5173-square-meter part of the Mount of Olives from a tender in Milan on July 31, 2018. The property belonged to "the Italian Monte Tabor". This is likely to mean the  San Raffaele del Monte Tabor Endowment by Don Luigi Maria Verzè (1920-2011). The hospital empire of Don Verzès collapsed in 2011 and was liquidated as a result, as well as the assets of the Foundation.

The purchase price for the property is given as five million euros. The foundation, based in Panama, then donated it to the Neocatechumenal Way. This new spiritual community wants to establish "an international mission center in the Holy Land" there.

Several religious organizations had shown strong interest in the property. For this reason, finally, a call for tenders was made. Finally, the circle of interested parties was reduced to three: the Domus Jerusalem Foundation, the Eritrean Orthodox Church and the Coptic Orthodox Patriarchate of Alexandria.

Through a middleman for the priest Manuel Anselmo Diaz Ortiz, pastor of Our Lady of Guadalupe in Panama, the president of the Domus Jerusalem Foundation, they were  awarded the contract.

The foundation, hence its name, was founded with the intention of creating a "new retreat and ecumenical center" in Jerusalem "to welcome pilgrims from all over the world". According to the model and the experience of Domus Galilaeae, it is to be built on the Mount of Beatitudes, which was also built by the Neocatechumenal Way.

The Domus Galilaeae on the Mount of Beatitudes

The Domus Galilaeae was completed in the year of the Holy Year 2000. It is run as a study and conference center and retreat house. The Neocatechumenate describes the mission of this Domus,  "to read the Gospel in the light of tradition and the Jewish liturgy" to "proclaim the mystery of this people, which does not prove the existence of God, but as a living witness announcing its presence throughout history." The authorization for the construction of Domus Galilaeae on the Mount of Beatitudes was provided to the Neocatechumenal Way by the Franciscan Custody of the Holy Land. The foundation stone was laid in 1999 with a fragment of the tomb of the Apostle Peter from the Vatican, which was blessed by Pope John Paul II (for Domus Galilaeae see also The Conversion of 1000 Jews: What does the Neocatechumenal way about the end of the times and conceals it ?).

The foundation Domus Jerusalem was therefore created in Panama, as it is also known to Neocatechumenate related circles, because the idea arose there and pastor Diaz Ortiz there acts.

Model of the project Domus Jerusalem

The Domus Jerusalem project is supported by "many personalities and benefactors," including Cardinals Sean O'Malley of Boston, Cardinal Antonio Rouco of Madrid, and Cardinal Christoph Schönborn of Vienna, as shown on the project's website.

In recent years, funds have already been collected for the realization of the project, but there was still a lack of suitable land. With the acquisition on the Mount of Olives, near the Garden of Gethsemane, where Jesus prayed with His disciples after the Last Supper and suffered mortal fear before he was arrested.