Cardinal Müller recently presented in an interview the teaching of the Church on the issues of homosexuality, celibacy and abuses by clerics. He did what is expected of every theologian: "obliging the Magisterium of the Church to fully and comprehensively teach the doctrine of the Church.” With this promise, the controversial Jesuit priest and university professor Ansgar Wucherpfennig averted the Vatican's non-recognition as a university rector. The same ecclesiastical circles that acclaimed this compromise with Rome themselves do not think of recognizing the statements of the Church Magisterium. In any case, they reacted negatively or aggressively to Müller's statements:

-A committee of the German Bishops' Conference called the church teachings on sexual morality "dangerous".

- The Jesuit Father Klaus Mertes pulped the utterances of the former head of the Congregation of the Faith as "nonsense.”

-The Frankfurt canon Johannes zu Eltz complained about the magisterial review of homosexual theologians: "This whole mess has entered the bin.”

What are the reasons for such "reactionary hostility" to doctrinal statements?

In the light of the published abuse study MHG, DBK strategists seem to be seizing the opportunity to attackChurch  doctrine on homosexuality. The bishops of a DBK prevention conference agreed with great applause to the thesis that Müller's statements on Church doctrine are "inflammatory.”  For they cemented a sexual morality "that contributed to sexual violence". These allegations have no basis whatsoever in the facts of the abuse study. Nor can any evidence claim the implication of the theses. According to this, the ethical acceptance of gay-lesbian ways of life among believers and clerics would be a contribution to the prevention of clerical abuse. Manfred Lütz describes such theses as without factual basis, which are also spread by the authors of the abuse study, a "low point" in scientific work and evaluation of empirical data. 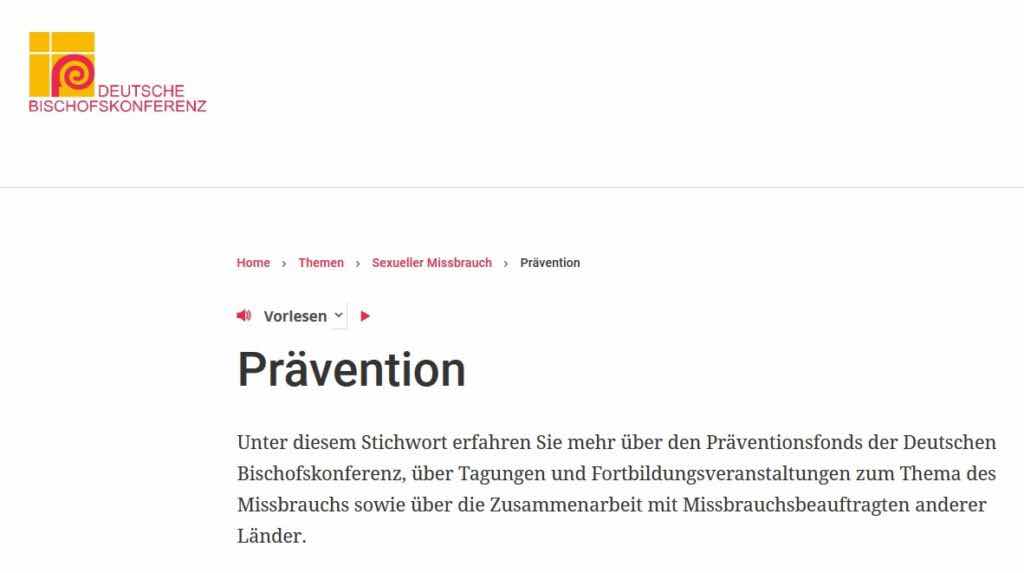 "Prevention" in the understanding of the German Bishops' Conference

On the other hand, in the wake of the MHG study, bishops vehemently deny that most sexual attacks are overwhelmingly from aberrosexuals. This blatant contradiction can not be sold to a reasonable person. The emotional excitement of the bishop's council seems to obscure this argumentative contradiction.

All the more then did the DBK bishops feel caught when they were confronted by Cardinal Müller with the clear message of the Church's teaching office: "Sexual contacts between persons of the same sex are diametrically opposed to the sense of sexuality that is fundamental in creation." Müller thus gave the doctrine of the Church again, as the then Cardinal Ratzinger formulated it in 2003 and Pope Francis affirmed in his post-synodal writing "Amoris laetitia" in chapter 251: "There is no foundation for establishing analogies between homosexual partnerships and God's plan of marriage and family in a broader sense.”

Bishop Bode and other churchmen want to deny the Church doctrine on homosexuality over "Insights of Human Science". How problematic it is to eradicate the biblically based doctrine through zeitgeist of scientific tendencies is shown by an example from the 70s and 80s. At that time, dozens of sexologists claimed that consensual sex between adults and children was completely harmless. On the basis of the Green party, as of the middle of the 80s, it demanded the legalization of pedophile acts against the state’s majority two party congressional majority. Volker Beck also later justified his unspeakable claim of 1988 that homosexuals should pioneer the decriminalization of pedosexuals, pointing out that this had been the state of science back then. The decisions of the Greens had led to the fact that around 1,000 children were abused within a few years within the party. The Catholic schools also radiated this pedosexual revolution. In the two decades mentioned, the attacks by aberrosexual clerics doubled.

The Jesuit Father Klaus Mertes commented on statements by Cardinal Müller with the remark: "This is nonsense".
He accompanied his verbal abnegation with a condescending grin during the interview by catholic.de. These signs of arrogance should cover up the substantive weakness of his remarks. Because Mertes denied any confrontation with obvious facts and evidence for the large proportion of homosexual clerics in sexual assaults. The fact that more than two-thirds of the victims of abuse were boys at the age of puberty and sexual maturity (11 to 17 years), urges the hypothesis that the perpetrators were predominantly homosexuals. This approach is corroborated by research showing that homosexuals have significant ephebophilic preferences. A recent American study by the Ruth Institute concludes that there is a strong correlation between the growth of homosexual clergy and abuse cases in the US. The current MHG abuse study on page 48 presents an analogous research project. Accordingly 42.6 percent of clerical abusers were of a  homosexual or bisexual orientation. If one considers that the proportion of serial abuse among clerical homosexuals is particularly high, then the initial thesis of predominantly homosexual perpetrators is also to be documented numerically.

Klaus Mertes served these fact-based results as "short circuit" and "nonsense". In addition, he denounced the rational approach as a "homophobic strategy.” Against the arguments along the empirical data, he relied on conjecture and speculation. But he can not begin to explain the phenomenon of disproportionate boy abuse by clerics.

Gays have no place in the consecrated, priestly life

So Mertes lamented an "overheated superstition of the status of the priest.” He was a "part of the problem" of sexual abuse. The Jesuit priest, who publicly hides his priesthood in casual clothes, has desceibed the alleged superstition of priests as “exaltation of the sacramental priesthood."
Furthermore, causes of the abuse are "structural conditions" - a popular buzzword with little factual content. Mertes included "the tabooing of homosexuality" in the clergy. Therefore, homosexual clerics would not be able to discuss their homosexuality in a discursive way. Does not the Jesuit priest underestimate the ability of academically educated clergy to reflect on themselves? And what exactly would this alleged "silence cartel" have to do with the abuse? The eloquent cleric is silent about this. Instead, his eloquence culminates in the speculative claim that "the structural causes" are "to be found in the context of the prohibition of admitting homosexuality to priestly ordination." Conversely, Mertes's thesis is that if homosexuals were officially admitted to the priesthood, the structural causes of clerical abuse would be removed. A side effect of this thesis is the implication that homosexual clerics were involved in abuse.
Incidentally, Mertes' wording on the "admission of homosexuality" is incorrect. The popes Benedict and again Francis have determined that seminarians with "deep-rooted homosexual tendencies" as well as participation in the gay culture may not be admitted to the priesthood. Recently, Francis affirmed that "there is no room for gays in the consecrated, priestly life." Homosexual clergymen who lead a double life as priests and gays should rather give up their ministry.

Claus Mertes SJ vs the Catholic Church. A good Pope would dismiss and defrock him.