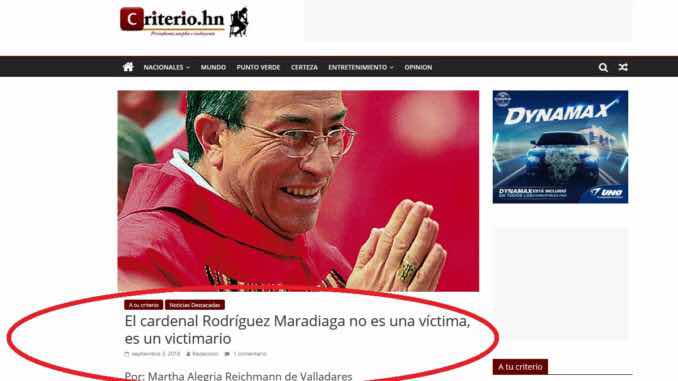 (Tegucigalpa / Rome) Cardinal Maradiaga, archbishop of Tegucigalpa, Primate of Honduras, coordinator of the C9 Cardinal Council, close confidant of Pope Francis and former President of Caritas Internationalis, has been under fire since Christmas 2017. The Honduran cardinal is known for his powerful words. Since the publication of the Viganò dossier, he has been lashing out. A sign of the highest tension, not only because Pope Francis is being criticized, but he himself.
A short flashback
There has still been no official discussion that Pope Francis wants to grant re-married divorced and other persons in an irregular situation the admission to Communion. Cardinal Walter Kasper had not yet delivered his notorious speech to the Cardinal Consistory at the end of February 2014. Attentive observers, including the then Prefect of the Doctrine of the Faith and not-yet Cardinal, Gerhard Müller, warned  more or less clearly against such an intention. On January 20, 2014, Cardinal Oscar Rodriguez Maradiaga, who obviously already knew more about the papal roadmap, mocked Müller, saying that he should be "a little flexible" in the matter.
Cardinal Maradiaga, one of Pope Francis' closest confidants 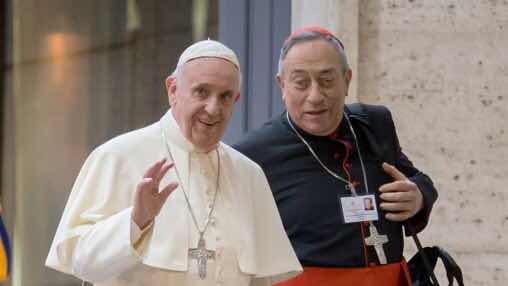 For, according to the Honduran, who at that time appeared as Spokesman of Francis, so that he was called "Vice-Pope" by Vaticanistas: “we are at the beginning of a new era in the Church.”
On March 25, 2017 Maradiaga attacked the four cardinals on Swiss television in an unusually polemical and underhand manner, who had submitted their Dubia (doubts) on the controversial post-synodal writing Amoris Laetitia. For two years, Francis has refused any answer. He is now showing the same behavior in connection with the Viganò dossier, which weighs heavily on him.
Cardinal Maradiaga then aimed in the direction of the Cardinals Brandmüller, Burke, Caffarra and Meisner:

"First and foremost, I think they did not read Amoris Laetitia, because unfortunately that is the case! I know the four and say: you are already retired. How come they say nothing to those who make weapons? Some are in countries that produce and sell weapons for the genocide that is taking place in Syria - for example. Why? I do not want to be, let's say, too harsh: only God alone knows the conscience of men and the inner motives, but seen from the outside, this seems to me a new pharisaism. They were wrong, they better do something else.”

Pope Francis did not call his confidant to reason, let alone demanded an apology from him.
Pontifical contact to George Soros
Cardinal Maradiaga, a member of the Pope Francis' Magic Circle, is the man who has direct contacts with George Soros and threaded his sponsorship of the Pope's visit to the US in September 2015. As announced in August 2016 by revelations from DC Leaks, Soros financed the pope's visit to Obama’s country with $650,000. Without any expectations? Hard to believe. Since then, some observers see a reason for the papal silence on certain, controversial issues such as "gay marriage". The same is true of the Vatican Dementia Theater, when it became known that Francis had briefly met with Kim Davis at the Papal Nunciature in Washington, the elected county official who, with her opposition to "gay marriage", became a symbol freedom of conscience. For Pope Francis and his clique it was the top priority, not to irritate Barack Obama and the forces behind him.
Maradiaga is a major proponent of rhetorical pauperism in the Church. But he is also considered the "inventor" and main proponent of the thesis that Pope Francis is a new John XXIII, who is bringing the "new spring", which he had promised. Above all, his is the thesis that Francis was the "victim" of "traitors and intriguers" who wanted to prevent the necessary "reforms" in the service of evil.
In September 2017, the primate of Honduras and C9 Coordinator with an autobiographical book barely veiled as a potential successor to Pope Francis in position.
Cardinal with "dark shadow"
But since Christmas 2017, the cardinal himself has been massively criticized. He is accused of corruption, enrichment and embezzlement. From the Catholic University of Honduras, whose Grand Chancellor - also president - he is, he was transferred 600,000 dollars in that year. Allegedly, the money was intended for the "poor parishes" of his Archdiocese. But the money flowed into the personal accounts of the cardinal. A forwarding to the "poor parishes" is not proven.
Martha Reichmann de Valladares, the widow of the former Honduran ambassador to the Holy See, raised further charges and accused the Cardinal of having liquidated her and her family's property.
However, it is particularly explosive that his suffragan bishop, Mons. Juan Jose Pineda, who was appointed at the request of Maradiaga, was accused of a double life. Pineda is accused of corruption, embezzlement and an aberrosexual double life by US Vatican Edward Pentin. Pineda was also guilty of engaging in sexual misconduct with subordinates and seminarians. It is therefore not accidental that Pineda was de facto emeritus at the same time as Francis Theodore McCarrick had been withdrawn from the cardinal dignity. Both are under similar allegations.
While the accusations at McCarrick are named, Pineda and Maradiaga try, with the help of the Holy See, to cover up any wrongdoing. Martha Reichmann de Valladares speaks of a cardinal "with dark shadows".
It is unbelievable that Cardinal Maradiaga did not want to know about the machinations of his right hand. Since, in principle, any machinations of Pineda are denied, the Cardinal does not have to justify himself at present. His strategy in the case of Pineda is not the same as that of Pope Francis to the Viganò dossier, but the parallels are unmistakable. Both refuse to answer questions and hope to be adequately covered by the media by those forces that Pope Francis did not want to irritate during his US visit in 2015, and to which he spoke about his political arm, Curia Bishop Marcelo Sanchez Sorondo, since the beginning of his pontificate seeks contact.
Cardinal Maradiaga: "Fecal Networks"
Last Sunday, Cardinal Maradiaga made a sweeping strike against the critics of Pope Francis and his own, which he likes to mix. Already at the beginning of the year, when the first allegations were made against him, he claimed that those who attacked him really wanted to attack Pope Francis. In plain words, he wanted to say that whoever attacks me, attacks Pope Francis, thus with lese majeste.
In his sermon in the Cathedral of Tegucigalpa, the cardinal described the social networks in which the criticism was disseminated against him as "fecal networks".
That sounded quite different a few years ago. On March 25, 2014, the Vatican news site News.va, a precursor to today's news platform Vatican News, reported on the launch of a "Catholic social network" called DeoSpace, "led by its Director-General, Cardinal Oscar Rodriguez Maradiaga S.D.B." (see the article adopted by Aleteia).
Martha Reichmann de Valladares: "We are the victims"
Martha Alegria Reichmann de Valladares, the widow of the former Honduran ambassador who feels cheated out of her family fortune by Cardinal Maradiaga, commented on the Cardinal's sermon on the Criterio website:

"Cardinal Rodriguez Maradiaga is not a victim but an offender".

The cardinal went in and out of her house for decades. "He belonged to the family," as she said last February. The widow, does not mince words today:

"Cardinal Oscar Andrés Rodríguez Maradiaga is not only insulting and lying to those who have the courage to accuse him, but calls them contract killers and anonymous media attackers."

Marta Reichmann-Valladares speaks of "a pinnacle of cynicism".
The cardinal is so wild because he can not put forward "valid reasons" for his defense.

"He has no arguments to prove that what is said is wrong. On the one hand he is the only one to remain silent and to insult and lie.”

Media can protect sources through anonymity. However, once it comes to a lawsuit, they must name the names. Cardinal Maradiaga insulted and insulted, but he shrinks from slander lawsuits, because then it's about evidence.
Maradiaga, according to Reichmann-Valladares, did not complain to the Italian weekly L'Espresso about alleged financial irregularities; he did not complain to Vatican Edward Pentin of the serious allegations against his Auxiliary Bishop Pineda, which also affected the cardinal, and he did not, although she did not make detailed allegations until April 9, 2018, in a detailed memorandum.
The same applies to the allegations contained in the Viganò dossier.
It is a lie that critics "resist the reforms of the Church". That was just a pretext with which Maradiaga tries to defend himself.

"We who accuse him are the victims."

"We are the people who are tired of the stinking rot that has been hushed up for so many years, and the proof is that Pineda was eventually removed."

Martha Reichmann-Valladares accused Cardinal Maradiaga of having "arbitrarily" marginalized, isolated, and even discredited priests in his diocese, "just because they had informed the Cardinal of the machinations of Pineda." In particular, she mentions the priests Bernardo Font, Domingo Salvador and Francisco Torres, whom Maradiaga suspended from the priesthood. The latter two died "left to their fate outside the Church".
The Ambassador Widow takes up words from the Cardinal from his Sunday sermon and turns them against him:

"That is to act against the will of God, that is why Cardinal Rodriguez is the one who is not pleasing in the eyes of God."