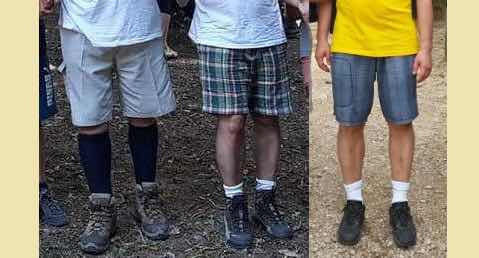 (Rome) The traditional website Messa in Latino speaks of "Bermuda clergy". This refers to priests and even bishops who do not quite hit the mark with their clothes during public appearances. In other words, they do not dress according to their status and dignity.
Bermuda clergy: on the right Bishop Andrea Migliavacca with Don Armando Zappolini. 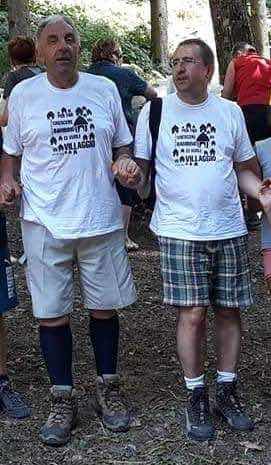 A concrete example are photos published on Facebook from Tuscany. In the picture are Bishop Andrea Migliavacca of San Miniato and the priest of this diocese Armando Zappolini.
May one interfere with the dress code of others? Is not such interference with a priest and bishop irreverent? One has to understand ... What is already there ... Such and similar objections can be heard occasionally.  The office and the sacrament of Holy Orders demands respect, but especially from the cleric himself.
Don Zappolini is known for initiatives that receive ample media interest. Last year, he provided the premises of his parish for Ramadan celebrations. Before the parliamentary elections in 2018, he was seen in the "merciful" T-shirt with an inscription against Silvio Berlusconi: "Silvio, give you a fire." One of his actions at Christmas 2017 was an "anti-fascist refugee nativity scene". Zappolini published a book entitled "A Priest According to Francis". What is meant is that the book claims to present the priest, as Pope Francis wishes, and that Don Zappolini is such a priest.
Bishop Migliavacca seems to be unusually attached to the bustling priest. Together, they attended a conference on another idiosyncratic priest,Don Andrea Gallo.
The latest action by Don Zappolini, which obviously has to do with Bermuda shorts, need not be explained further. Because a "justification" is always found.
The clothing of the clerics, however, is not a matter of personal taste, but normative by the Church. The Official Directory for the ministry and life of priests states in No. 66:
"The priest must be recognizable above all through his behavior, but also through his clothing, so that every believer, and indeed every man, can immediately recognize his identity and his belonging to God and the Church.
For this reason, according to the norms issued by the Episcopal Conference and according to the legitimate local customs, the cleric must wear decent ecclesiastical clothing. This means that this clothing, if it is not the cassock, has to be different from the type of clothing of the laity and conforms to the dignity and sacrality of the ministry. Section and color must be determined by the Episcopal Conference, always in harmony with the dispositions of general law.
Because of their incoherence with the spirit of such discipline, contrary practices can not be considered as legitimate habits, and so they must be abolished by the relevant authorities. Except for quite exceptional situations, the cleric's failure to use ecclesiastical clothing may manifest a weak sense of one's identity as a shepherd devoted entirely to the ministry of the church. "
The Episcopal Conferences have to transpose these provisions, which was done in Italy by Decision No 12 of 23 December 1983. In it, the Italian Bishops' Conference affirmed that "the clergy have to wear in public the soutane (cassock) or Roman collar.”
In the German-speaking world, the Episcopal Conferences, at least those of the Federal Republic of Germany and Austria, interpreted the Roman Statute more loosely, despite its binding validity. The clergy have to wear Roman collar or oratory collar, but "in justified cases" (Austria) or "in well-founded exceptional cases" (Germany) wear a dark suit with a cross on the collar lapel. There is no talk of the cassock as binding priestly clothing outside the liturgy. As it really looks, it does not need to be explained here. The Swiss Bishops' Conference does not seem to have issued its own regulations, which is why the Roman standard would apply anyway.
There don’t seem to be any provisions for Bermuda shorts. Neither a bishop nor a priest are private persons in public. The "Bermuda clerics" can claim for their "inappropriate appearance no understandable, 'pastoral' emergency situation," said Messa in Latino.
Text: Giuseppe Nardi
Image: MiL (Screenshots)
Trans: Tancred vekron99@hotmail.com
AMDG
Don Andrea Gallo.
Posted by Tancred at 7:37 AM

"Bermuda clergy: on the right Bishop Andrea Migliavacca with Don Armando Zappolini." ...out for a romantic stroll in the park with near matching attire. "Bishop Migliavacca seems to be unusually attached to the bustling priest."

As a Boy Scout adult leader, I required our Boy Scouts to dress AS Boy Scouts when out in the public. I would tell them that people seeing the uniform would know who they were and what they stood for. Too bad Priest and Bishops don't understand this simple truth.

55+ years of slobs in the pews, so we shouldn't be surprised by Episcopal Bermuda shorts.

While much of what you say is valid, I also noticed that both Bermuda clad clerics also sport hiking boots. I suspect they are about to climb a mountain and with that their attire becomes appropriate

Sure do look very gay....and holding hands! You gotta be joking!!

This is the model of Pope Francis clergy. It's what he would prefer over the clerical shirt, and the traditional priestly soutane(cassock) of course is anathema to Francis and company.

Francis would dress like this in public if he could get away with it. Guaranteed.

These are probably two hand-holding gayboys.
Disgrace as a bishop and a priest.

No. Even Boy Scouts hike in uniform. Does it have to be a full cassock? No. But until the last 100 years or so they did wear the cassock while "hiking" about trying to bring the faith to the unexplored regions of the world.

The law clearly asks for cassocks.

I hope people in Italy use this photo to discredit the radical liberal
Bishop Migliavacca , and perhaps force his resignation.
He is a Francis appointment. Who else would scrape the bottom of the ecclesiastical barrel for scum like this?