Edit: there you go. I fixed the title and made it better. It looks like he was wearing a flesh colored skin tight garment while he liturgically danced. Anyway, whatever some lefties might try to make of it, a local priest elicited his enthusiastic approval of it on the radio later.

Stuttgart (kath.net) Last Saturday in the Moritzkirche in Augsburg ("City Pastoral Care"), there was a clear liturgical abuse that caused a shakeup of Catholics in the diocese of Augsburg and beyond. As part of the first Mass of the new priest Fabian Ploneczka the Diocese of Rottenburg-Stuttgart, held a so-called triduum in the Augsburg Moritzkirche. According to observers on site, a dancer dressed only in skintight boxer shorts danced the "theme" of the Vesper service and tried to depict the "Jeremiah Passion of a Prophet" with a ballet insert Church space became a dance floor, even the altar area, according to church visitors attending the event, where the dancer picked up the gospel, humped the ambo almost naked, and lasciviously lolled in front of the altar.

Following a performance by the dancer, the Stuttgart radio pastor Thomas Steiger spoke on the subject of "eroticism of the faith." He praised observers who received an alleged grace and especially of the male body, which, he says, spoke of a "sensual love for Jesus".

Worshipers told kath.net that there was a clearly homophile, yes, homoerotic event in a consecrated church.

The "event" led to the bizarre reaction that a churchgoer shouted loudly that then everyone could undress. He then partially undressed and stood up half naked in the church.

Some visitors left the service prematurely in which also children participated. 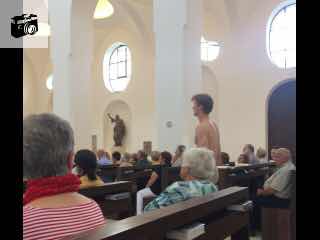 Augsburg is the original home diocese of the new priest, but has changed to the neighboring diocese Rottenburg-Stuttgart. 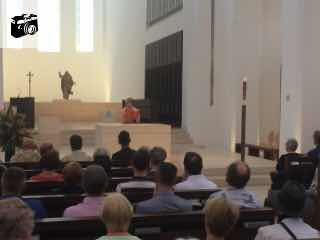