Pope's Two New Teachings: All Are Children of God and Atheists Go to Heaven 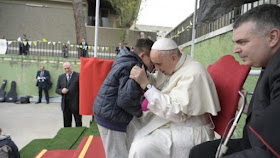 
The tears of little Emanuele

The neighborhood was built between 1975 and 1984 on the outskirts of Rome. This includes the "Serpentone," a gigantic silo shaped building with 1,200 apartments, built by the Office for Social Housing of the City of Rome. The parish was established in 1977, the church in modern style was consecrated in 1983. In 1985, Pope John Paul II elevated it to the titular church of a cardinal priest, whose owner since 2007 has been Oswald Cardinal Gracias, Archbishop of Bombay.

A program point of the visit was an encounter with children of the parish. The pope was asked some questions. Emanuele was also allowed to meet the pope. Only a few months ago, the boy had lost his father. When he stood in front of the microphone, he burst into tears and could not speak.

Emanuele wept over his father's death, but more because a deeper pain moved him. Pope Francis waved the child to him and said that Emanuele should just whisper in his ear what moved him. The Pope and the child spoke in this way for a few minutes with the exclusion of the microphones. Only them speaking to each other. Then Emanuele returned to his seat and Francis again took the floor for everyone to hear.


Is the father, though he's an atheist, in heaven?

The pope said that the boy is very worried. Although his father had all his children baptized, he was an atheist. Worried about this, if his atheistic father could not go to heaven, Francis answered.


Pope Francis: Would we only cry like Emanuele if we bear suffering in our hearts like him. He cried for his father and had the courage to do it before us all, because in his heart is the love of the Father. I asked Emanuele for permission to repeat his question publicly, and he gave me his consent. That's why I'm repeating it. "My dad died recently. He was an atheist, but had all four children baptized. He was a good man. Is Dad in heaven? "
How nice that a child says of his father, "He was good." It's a beautiful testimony that this man has given to his children, because his children can say, "He was a good man". It is a beautiful testimony of the Son, who inherited the strength of the Father and also had the courage, had the courage to weep in front of us all. If this man was capable of producing such children, then he was really a good man. He was a good man. This man did not have the gift of faith, he was not a believer, but he had his children baptized. He had a good heart. And he has the doubt that his father, because he was not a believer, is not in heaven. Who says who comes to heaven, that's God. But what is the heart of God to such a father? How is it? What do you all mean? ... God has a father's heart. And with a non-believing father, he was able to baptize the children and give them that bravura to the children, do you think that God would be able to keep him away from him? Do you think so? ... loud, with courage ...


Pope Francis: Does God fail his children when they are good?

Pope Francis: Emanuele, that's the answer.  God was certainly proud of your father, because it is much easier to have children baptized, if you are a believer than you are not. And certainly God has liked it a lot. Talk to your father, pray for your father. Thank you, Emanuele, for your courage.

The "beautiful words of the Pope"

The Italian media devoted a lot of space to the event and were delighted. The most important newspaper in Italy, Corriere della Sera headlined:


"Pope Francis in Corviale comforts a child:" Your father, though not believing, is in heaven ".

Even the newspaper Il Foglio wrote of "beautiful words of the Pope".

Did they all misunderstand the Pope? Francis did not say that the father of the child is in heaven, even though he was an atheist.

Did Francis in the Roman suburban parish apply his special magic formula of communication, with which everyone understands what he wants to say, without having to say it explicitly?

Le Cronache di Papa Francesco did not hear in answer to the boy what most media heard, but a "recognition of atheism".

Can the serious question of Emanuele really be answered only from the perspective of a child to be comforted? Even in personal conversation and considering the age of the child, the answer would have been shortened and misleading. However, the Pope publicly responded to which the usual media reports followed, "The Pope said ..."  The answer to a specific child in a specific situation becomes a detached statement from the Pope, which can move people around the world and influence them in their thinking and decisions.


"Bergoglio is a Jesuit, which is why he puts it in such a way that it is difficult to pin him down. While accusing the devout Catholics of being 'strict' and having 'an answer to everything', it was on Sunday, and not for the first time, that gave the impression of a quick and pleasing answer to everything at hand. With him, it would probably be impossible to have a serious and clear argument about the doctrine. "

Not a word about purgatory, sin and salvation

Emanuele, the child, asked the head of the Church a legitimate question that has its origin in the love of the Father. It is a thoroughly Catholic question, because the concern is concern for the eternal salvation of the Father. The child showed a very clear consciousness. He knows about the atheism of the Father and knows that it contradicts the love of God. That's why he's worried.

Pope Francis began his answer as any good catechist would begin. He consoled the child, starting from what the child knew and could tell about the father. What the Father really thought and did is beyond the knowledge of the Pope. For that reason, he did not answer Emanuele with a "Yes, your father is, though incredulous, in heaven," as the media claims.

However, from the brief, straightforward question typical of children, Francis asked a whole series of questions that he addressed indirectly to the audience, turning it in one direction and leading to the answer he wanted to put in his mouth. The first answer was certainly the most important one. It is God who "says" who goes to heaven. But then, with broad questions, he turned the ball back and forth several times, so that in the end there seemed to be no other answer than that, though the Pope had not said that Emanuel's father, though an atheist, must be in heaven.

Pope Francis has never spoken of purgatory in his pontificate. That day would have been the opportunity. Just as the Pope can not know whether Emanuele's father is in hell - and to say so, would be inappropriate to a mourning child anyway - he can not know directly, nor imply that Emanuele's father, of whom the little child knew that he denied the existence of God, was in heaven, and that directly.


Consolation at the price of misleading?

The comfort of the bereaved is not only an honorable task, but is one of the works of mercy. But also at the price of weighing it in false hopes or even certainties?

The Pope could have asked the child if Holy Mass had been said for the Father. In addition, he could have talked about the Purgatory for the poor souls, where those who are saved but still need to be cleansed to gain access to Heaven. This time can shorten the living by their prayer and the sacrifice of Mass intentions and thereby perform great sacrifices of love for the deceased.

The Pope could have spoken about the eternal salvation and the necessary conditions for it. One does not go to heaven because one was a "good person" but because one did not die in the state of mortal sin and of course did not reject, reject or even mock God.

The Pope could have talked about the meaning of life. About the first of all questions: why did God create me? To know Him, to worship Him, to obey His commandments, and thereby go to heaven. Francis could and should have said a word about atheism. And so the impression had to arise that under the "good pope" Francis that an atheist also goes to heaven.

But whom should such misleading benefit?


"People who are not baptized are not children of God?"

Perhaps another, obviously prepared child question on the same day and at the same meeting helps to gain greater clarity. Carlotta, a young girl, also asked Francis a question.

The difference abolished by Francis


In fact, the apostle Paul, mentioned by Pope Francis, in the New Testament refers only to Christians as the children of God and distinguishes them by the baptism to non-Christians. The latter Paul refers as "servants" and "slaves of sin." All men are creatures of God, but only the baptized are children of God. A clear and easy to understand distinction.

The non-Christians are, therefore, not children of God, but Pope Francis twists the ball twice in his hands and behold, all people "all, all", "not only the baptized" are suddenly children of God.

What is the difference between the baptized and the baptized? All are children of God, but some, the baptized, are "more children of God." With his snazzy way of speaking, last Sunday the head of the Church actually ruined a central biblical, apostolic, and above all, crystal clear distinction in favor of a blurred, ultimately useless substitute.


The message of Francis is pleasing Eugenio Scalfari

If one did not wish to impute the unawareness and naivety of the Church leader, which does not even seem theoretically conceivable vis-à-vis a Jesuit, then one must accept an intention behind this answer.

Already in the first controversial " Video of the Pope " of January 2016, all people (in the video were shown Christians, Jews, Muslims and Buddhists) were declared as "children of God" in a syncretistic infusion. It was therefore not a slip by the pope last Sunday. Therefore the message can not be that through baptism one becomes "even more children of God." The real message that Pope Francis wants to spread is the mistaken assertion that all men are children of God.

Taking the answer to Carlotta and the answer to little Emanuele, Pope Francis has said two things:
This statement corresponds exactly to the thesis that the atheist Eugenio Scalfari wanted Francis so much to hear, and he put it in his mouth recently and at the same time "eliminated" Hell. The Vatican responded with a denial that was not really one. Now we also know why: because Eugenio Scalfari did not reproduce the words of the pope verbatim, but exactly his thinking. Exactly as Scalfari had always said: He vouches for the authenticity of the statements.

It was therefore the Vatican, that sprinkled with a denial, a fog of non-denial and prevented the necessary clarifications, or at least made it difficult.

Or did they all get it wrong?

The video which shows the entire parish event, starting with the meeting with Carlotta:

The section with Emmanuel: