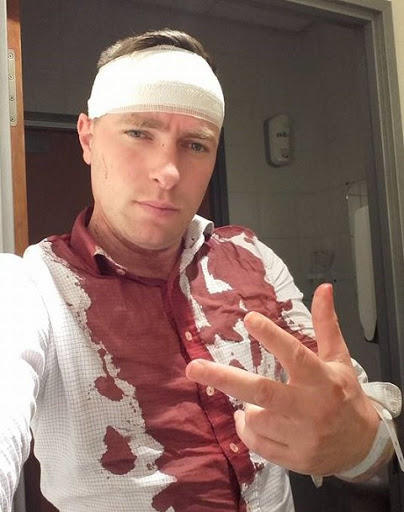 Edit: the following is a report from a music journalist who took note of the event and is concerned by the thuggery, and well he should be.  The event took place last year in March.

We've known about this entertainer for a while. It looks like he's continued to be active in the years since his big hit celebrating France's tradition and religion.

Being hit in the head by a hammer is always a life changing experience. He seems to have been very quiet in the year since this happened:

While all the media were bashing us with "Black M" [He is a French rapper of African background.], that the politicians of the left (Taubira, Cambadélis, Lang ...) and the pseudo-philosopher but real cosmopolitan Bernard Henri-Lévy were whining about the cancellation of the concert planned in Verdun in the context of the commemoration of the centenary of the war of 14-18 and shouting at the return of a fascist fantasy, a rapper called "Goldofaf" (mixture of Goldorak and faf) was brutally assaulted on May 13 in the evening at the terrace of a cafe in the 15th arrondissement of Paris by individuals armed with hammers and truncheons who left him covered in blood.

What is the difference between "Black M" and "Goldofaf"?

There is a fundamental opposition between these two individuals, one spitting on France and the "kouffars", was dubbed and widely promoted by the media system. Less popular, the second poses as an unconditional defender of France and the Catholic tradition. While "Black M" is greeted with open arms everywhere and can give concerts where he wishes (after the Verdun episode, maybe things will change slightly but I doubt it), patriotic rappers such as " Goldofaf "or" Kroc Blanc "can not occur on stage, except in private events whose address will of course be disclosed at the last moment in order to prevent ultra-left nervis from playing the cries of "No pàsaran", "No freedom for the enemies of freedom".

We have the right not to love rap at all, not to be a Catholic and counter-revolutionary like "Goldofaf". However this rapper, and the same goes for the other singers of the movement, disturbs the oligarchy. The aggression he was targeted with is unacceptable (if "Black M" had been beaten, I would have also condemned the act but all the television stations would have spoken of it certainly blaming the occurrence upon the intolerance of the "fachos." This is the silence of the media, and as the saying goes, which does not say consent.) This is enough of the impunity of the ultra-left, of these sectarian groups that behave like real militias and manipulate idle youths and then push them against an imaginary threat. An embrigade that is being done at the moment, including in the lycées, against the backdrop of fighting the El Khomri law. Although I have no illusions, I urge the authorities to react to find the perpetrators as quickly as possible and wish a sound recovery to this artist for this crime committed in behalf of the current ideology.

Here is the famous reprise of "Engraved in the rock" by the anti-French group Sniper, which Goldofaf had released a few years ago and which allowed him to gain notoriety.W