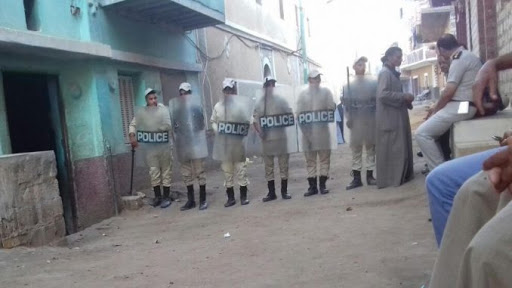 Egyptian policemen prevented the Holy Mass from being celebrated for the Copts of Al Furnace.

(Cairo) The 400 Coptic Christians of Al Furn in the Middle Egyptian province of al-Minya went to the building which they use for the celebration of Holy Mass. On 20 August, however, they were in for a surprise. Instead of the priest, the police were waiting for them.

The governor al-Minya is known for such and similar incidents against Christians. It is not a single case. The discrimination of Copts has "tradition" here. Last January the Christians of Alkarm were attacked by Muslims. A 70-year-old Coptic Christian woman had her clothes ripped off by attackers and left her in the street.

In this part of Middle Egypt, the Muslim Brotherhood, which burned dozens of churches in 2013, destroyed hundreds of houses and businesses of Christians. The Muslim Brotherhood justified the antichristian pogrom as "retaliation" for their followers killed by the Egyptian army after the violent dismissal of President Mohammed Mursi, a Muslim Brother himself.