Cardinal Simoni: "Pope Francis, Has Changed His Opinion About Medjugorje" 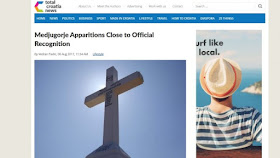 (Rome) Pope Francis has apparently "changed" his opinion on the alleged appearances of Medjugorje and was about to announce "good news". This was addressed by Cardinal Ernest Simoni SJ, who was sent by Pope Francis to the 28th International Youth Festival in Medjugorje.
On Sunday, the English-speaking, Croatian news page titled Total Croatia News , cited the Croatian daily newspaper Vecernji List.


The Albanian Jesuit Ernest Simoni was elevated to the rank of Cardinal by Pope Francis. Simoni had been detained by the communist regime for almost ten years in Albania until the early 1990s.
"In front of 50,000 young people from all over the world," the 88-year-old cardinal said at the Freilichtfestival in front of the parish church of Medjugorje. Before he embarked to the Herzegovinian town, he had asked the Pope for his blessing. According to the media reports, the Cardinal said that Francis had little information on Medjugorje, and that this had come from the "opponents" of the phenomenon. This is why the Pope could not have "a good opinion." But things would "change", according to the "personal ambassador of the pope".
In the past, Pope Francis was very critical of the phenomenon in which the Mother of God appeared as a kind of "postbot" or "head of a post office" to convey "messages" at a certain time. In the autumn of 2013, he mentions in a morning sermon in Santa Marta Medjugorje, in particular, as a negative example, as those present heard. The two summaries of Radio Vatican and Osservatore Romano did not mention Medjugorje.
According to Vecernji List, there is "no doubt" that Pope Francis "has now decided" to convey an "optimistic message". Cardinal Simoni preached "openly and without any reservations about the apparitions of Our Lady," according to the Croatian newspaper, which ended its report with the words:

"This ultimately signals that we are a small step from the final decision on the papal status of Medjugorje."