Bishop Schneider: "Personally Very Sad" About Rome's Letter to the SSPX -- "They Wouldn't Treat the Orthodox Like This" 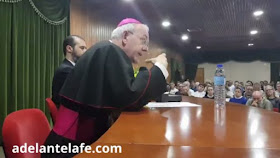 (Lisbon) Just before Cardinal Gerhard Müller was dismissed on 30 June by Pope Francis as Prefect of the Congregation for Doctrine of the Faith, he sent Bishop Bernard Fellay, the Superior General of the Priestly Society of St. Pius X, a letter. In this he announced that the General Assembly of the Congregation for the Congregation, with papal approval, as a condition for a possible Church recognition of the Society, again demanded the doctrinal preamble of 2012.

On 14 July, Bishop Athanasius Schneider, Auxiliary Bishop of Astana, has asked, in the course of a lecture held in Fatima, about the abrupt turning-point in the discussions between the Society and the Holy See. The question came from a member of the Spanish-speaking Catholic news site, Adelante la Fe, who was the organizer of the event. One of the founders of Adelante la Fe is the countryman, deceased in 2015, by Pope Francis Bishop Rogelio Livieres of Ciudad del Este, whom Pope Francis had deposed without a hearing and without mentioning reasons in 2014. In a press release of the Holy See, it was said that the harmony had been restored in the Paraguayan Episcopal Conference. The following text is the title of an audio section. Bishop Schneider spoke Portuguese in Fatima:


Adelante la Fe: Recently, a letter from the Congregation for the Doctrine of the Faith was publicly announced to the Superior General of the Society of Pius X, with which, as it seems, Rome returned to the point where the conversations under Benedict XVI. had broken down. The outcome of the current negotiations had given the impression that the problematic issues related to the Second Vatican Council in Rome might seem to be able to be the object of discussion, while now a priori a written agreement has been broached where agreement is demanded to the entire Vatican II and also to some parts of the post-conciliar Magisterium. Can you tell us something about this situation?

Msgr. Schneider: Personally, this document makes me very sad because I was one of the visitors of the Holy See who was sent to the Society of St. Pius X two years ago. There were four bishops. I was one of them. I have presented a report and proposed some solutions, and now almost everything we have done has proved to be useless. I think this is very anti-pastoral. For three years, the Holy See has encouraged visits and not followed a maximalistic path, but a pastoral way of integrating these realities of the Church, the FSSPX, pastorally to give it a chance to participate fully in the structures of the Church.

I think, therefore, that this is a very anti-pastoral gesture, and in contradiction to the whole mercy rhetoric that is being put forth - unfortunately. At the same time, on the other hand, implicitly, the entire Council is being made infallible, which is contrary to the whole tradition ... The Council is not infallible, according to its own statements, and the Popes John XIII. and Paul VI. have emphasized on numerous occasions that the Second Vatican Council had only pastoral aims. Paul VI. said many times that the Council has announced no new doctrines and that there is nothing in contradiction with the previous ones. So if nothing has been changed, then why this attitude? I see no justifiable reason for expressly declaring such a thing [expressly the recognition of the teachings of the Second Vatican Council and the post-conciliar period, as it is said in the letter of Cardinal Müller, Editor's note].

For example: Now we talk a lot of ecumenism, with particular generosity, and in the discussions with the Orthodox, the Lutherans are only required the minimum .... The minimum is required. Within the Church, however, one demands the maximum. The FSSPX, however, believes in the eternal dogmas. All dogmas. All. While the Orthodox Church, for example, denies the dogma of infallibility and of the papal primacy, and the Holy See does not even require the most indispensable.

For example, I know the Orthodox very well, because I am among them. I know their mentality. Regarding the conversion of Russia: This is not just for me, there are others who have seen it. A secret saint, who has perished in the persecution in Kazakhstan, shares the same opinion. He said, saying that the conversion of Russia ultimately means that the Orthodox Church will unite with the pope, with Rome. That is their conversion. I believe I hope it will be so. If the Russian Orthodox Church recognizes the primacy of the Pope, it will be a miracle to recognize the dogma of the Pope's infallibility, the dogma of the Immaculate Conception that she does not recognize today, and the Holy See says: "We accept all of your Dogmas, but the Second Vatican Council is strange to us: it is only pastoral, its language is not always clear, the whole about freedom of religion, ecumenism, etc. that does not convince us very much, and some statements of the Magisterium, we are here not sure. All the rest [the dogmas] we accept.

Imagine this: if the Orthodox Church were thus to be converted, the Holy See would at once grant the ecclesiastical communion without demanding what they did not yet agree with it. I'm sure. Of course one could ask oneself: "Would they do with the Orthodox what they do with the FSSPX?" No. I consider this to be very doubtful, but Divine Providence always works, and I also believe that the time is not yet ripe. It will take place when God wants it.

On July 26, was LifeSiteNews published the letter from Cardinal Müller, the interpretation that the former Prefect of the CDF wanted to put the talks with the SSPX on the shelf for the time being to save the Motu proprio Summorum Pontificum. At the beginning of July, a few days after Müller's letter became known, La Croix, the daily newspaper of the French Bishops'Conference, and the New York Times, had speculated that Pope Francis was allowing the recognition of the Society of Pius X in order to reverse Summorum Pontificum. Cardinal Müller, according to this interpretation, he had overturned the pope's plans and saved Summorum Pontificum.