Who Wants to Ruin the Maltese Order? 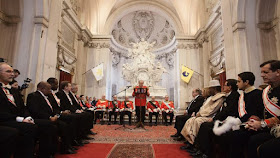 "Long before the civilized countries came to establish international law, long before they formulated the dream of a common force to protect the healthy freedom of man, the independence of peoples, and a peaceful equilibrium in their mutual relations, The Order of St. John had gathered in a religious fraternity with military discipline, men from eight different 'languages' dedicated to the defense of the spiritual values ​​that form the common heritage and prerogative of Christianity: faith, justice, social order and peace ."

These words, which Pius XII. January 8, 1940, the Knights of the Saint John of Jerusalem of Rhodes and of Malta Sovereign Military Hospitaller Order taught, summarize the essentials of the oldest order of knights, the only currently existing sovereign state whose flag flew on the field of the Crusades. An order whose charism was always, that which is stated in its motto: Tuitio fidei et Obsequium pauperum (Testimony of Faith and Help the Needy).
Is it possible that a pope wants to destroy this institution, which is the glory of Christianity? Unfortunately, this impression comes from the recent events that affect the Maltese presidency.
On December 27, 2016 a first reconstruction of these events was carried out at this point. Edward Pentin deepened and enriched the scenario in an article in the National Catholic Register on 7 January 2017 with further details. The following is a summary: On the 6th of December, the Grand Master of the Order of Malta, Grand Chancellor Albrecht Freiherr von Boeselager,resigned in the presence of two witnesses, one of them the Cardinal Patron Raymond Leo Burke, and Fra Matthew Festing. It had come to light that Grand Chancellor Boeselager had abused his power during his term as the Grand Hospitaller of the Order by promoting the distribution of condoms and preventive means, even those with an abortive effect in Third World countries.
In spite of his promise of obedience (promises), which obliged him to the Grand Master, the Grand Chancellor refused to resign. Thereupon, proceedings against him were initiated which suspended him from the exercise of any offices. Boeselager appealed to the Vatican Secretariat for help, who appointed an investigation commission to collect "elements that were capable of informing the Holy See completely and swiftly of the matter which recently concerning the Grand Chancellor of the Order,  Mr. Albrecht Freiherr von Boeselager," as the Vatican Press Office said on 22 December.
On December 23, the Grand Master of the Order declared the decision of the State Secretariat "unacceptable" and reminded the Vatican that Boeselager's dismissal is an "internal administrative act in the direction of the Sovereign Order of Malta and therefore falls exclusively within its jurisdiction."  In a further statement of 10 January, the Grand Master reaffirmed his intention not to cooperate with the Vatican Investigation Commission, "also to protect his own sovereignty against initiatives that occur in a form which is objective (and therefore independent of the intentions, legally irrelevant) aim at challenging or at least restricting this sphere."
The Vatican initiative immediately gave the impression of a sensational gaffe . The legal order of the Order of Malta is defined by the 1997 reformed constitution. Article 3 of the Constitution states in paragraph 1:

"The Order is the subject of international law and exercises the functions connected with the rights of sovereignty."

These functions are: the executive, represented by the Grand Master, assisted by the Sovereign Council; The Legislative, represented by the General Chapter; The judiciary, represented by the magistral tribunals. The Maltese Vicar provides diplomatic passports and has offices in Rome where he officially receives the representatives of more than 100 states with whom he has equal diplomatic relations. The Order enjoys priveleged relations with the Holy See, but in complete independence. The Holy See appoints a Cardinal Patron and an Ambassador to the Order, according to the provisions of international law. As Professor Paolo Gambi noted, the Order, in spite of its religious nature, which is common to ecclesiastical orders, occupies a completely special position, "enjoying an almost unique autonomy in the Church framework and the influence of this state [religious] is limited to  members with perpetual vows" (La Soberana Orden de Malta militar en el orden juridico eclesial e internacional , Ius Canonicum , XLIV, no. 87 (2004), pp 197-231).
Article 4, paragraph 6 of the Constitution of the Sovereign of Malta, is clear:

"The religious character of the Order does not preclude the exercise of the rights of sovereignty granted to it, insofar as the Order is the subject of state recognized by international law."

The confirmation of this international law status, even against the Holy See, the Pontifical Yearbook , in which the Order is mentioned only once, not among the religious orders, but among embassies accredited by the Holy See. The 1997 Constitution has eliminated various ecclesiastical interventions that have existed before, including the approval of the Holy See to validate the vows.

The responsibility of the Holy See on the religious life of the knights is limited to the members of the First Estate. These are the judges or professors who solemnly and forever take the three monastic vows. The members of the Second Class, the Knights and Ladies of obedience, take no vows, but are committed by the Promess of obedience and are therefore subject only to their superiors. Ex-Chancellor Albrecht von Boeselager is married and a father of five children, a layman and belongs to the Second Estate. He is not subordinate in any way to the Holy See. Apart from this, the Chevalier de Justice [Knight Judge] who (according to Art. 9, para. 1 of the Constitution) "Religious with all effects of Canon Law", are not obliged to live in community, which is an unicum representing the life of the Church. Fra Ludovico Chigi Albani della Rovere (1866-1951) was Prince and Grand Master of the Order from 1931-1951. After the death of his wife (1898), he gave solemn vows as a Judge, but still lived in the Palazzo Chigi, which until 1916 belonged to his family (at that time also home to the Austro-Hungarian Embassy and today is the seat of the Italian Prime Minister). There he led a life according to his status and rank.
Of course, the Church has the same right against the Maltese ordinance that it has against any sovereign state when it comes to problems that directly affect faith and morality. The Pope has the right and the duty to intervene in all political and social questions that have to do with the attainment of the highest goal of man, eternal life. When a state legitimates a natural sexual union, the pope has the duty to take a position and to challenge the grave violation of the Divine Law and Natural Law. When the Maltese ordinance promotes contraception and abortion, the Pope has the duty to raise his voice. Today, however, the opposite happens. The Church withdraws from its right of judgments on questions of morality which are of its own area and instead takes a position on political and administrative issues which are not part of its competence.
Christopher Lamb cited the Tablet of 5 January a letter from Cardinal Secretary of State Pietro Parolin, the went to Fra Matthew Festing on 21 December. In this, the Grand Master is informed that Pope Francis desires the rescission Boeselager's deposition.

"As I expressed to you in my previous letter of December 12, 2016, as far as the use and diffusion of methods and means contrary to the moral law, His Holiness has asked for a dialogue on the way in which possible problems are dealt with and can be solved. But he has never spoken of sending someone away!"

Let us summarize: for those who violate the law of God and natural law, there is dialogue and the outstretched hand. For those who, on the other hand, for those who defend the faith and Catholic morality, the truncheon of the political commissioner and the commission of inquiry is ready.
The group of knights around Albrecht von Boeselager is a secularized current in the Order, which would like to convert the Maltese order into a humanitarian NGO. On the other hand, the Order's current leadership is defined by fidelity to the religious roots of the Order. Perhaps that is their greatest sin, to which another is joined. In the course of more than 950 years of history, the Sovereign Order of Malta has never lost its aristocratic, chivalrous and sovereign form. This image represents the exact opposite of miserabilism and egalitarianism, represented by those who govern the Church today. The result is that clericalism is criticized, but in fact is practiced with devastating consequences. The massive interference of the State Secretariat in the name of Pope Francis provokes chaos and division in the interior of the Order.
In its long history, the Sovereign Maltese Knights has survived all vicissitudes. In the 250 years in Palestine, the 210 years on Rhodes, the 270 years on Malta, its mission seemed to have ended many times, and yet it rose again and again, even as the storm of the French Revolution and Napoleon swept across Europe. It is to be hoped that Grandmaster Fra Matthew Festing and the Sovereign Council, who stand by him, will be able to withstand decisively the strong pressure exerted on them in these days. Nobody could ever have doubted the love and affection of Grand-Master Ludovico Chigi Albani for the Pope, who, in his function as Marshal of the Holy Roman Church, took part in the election of three Popes. Nevertheless, he resisted every ecclesiastical attempt to interfere with the life of the Order. The Holy See had to recognize the sovereign nature of the Order of Malta "without interference by a secular or ecclesiastical authority," as Benedict XVI. remembered when he received the knight on the occasion of the 900th anniversary of the granting of the privilege Pie postulatio voluntatis  on 15 February 1113. With this solemn act, Pope Benedict emphasized, "Paschalis II placed the young Brotherhood of Jerusalem, named after St. John the Baptist, under the protection of the Church and made it sovereign."
* Roberto de Mattei , historian, father of five children, Professor of Modern History and History of Christianity at the European University of Rome, President of Lepanto Foundation, author of numerous books, most recently appeared: Vicario di Cristo. Il primato di Pietro tra normalità ed eccezione (Vicar of Christ. The primacy of Peter between normality and exception), Verona 2013; In English translation last: The Second Vatican Council - a hitherto unwritten story, Ruppichteroth 2011.
Translation: Giuseppe Nardi
Image: orderofmalta.int (Screenshot)
Trans: Tancre vekron99@hotmail.com
Link to Katholisches...
AMDG
Tancred at 5:53 PM
Share