NCR Purge: Simcha Fisher is Fired from NCR and EWTN

Edit: after years of attacking faithful Catholics and clergy, their reign at the Neoconservative news organ, The National Catholic Register, Simcha Fisher and Mark Shea have finally been dealt with.  They've been what's wrong with EWTN for a long while.  We've certainly been calling for these people's ouster for a long time. Now, how about Steve Graydanus.  Has anyone forgot that they fired the Cankerous?

There's nothing more despicable than these kinds of people who feed off the American Church. 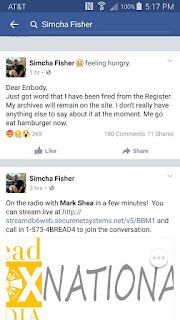 What took so long?

Was Carolyn McKinley's post what did her in, after she went on a profanity laden rant attacking clergy and faithful Catholics who found fault with her effeminate man friend?

Finally, remember when the fabulous John Paul Shimek attacked faithful Catholics in a blog which was quickly removed by the editorial staff of NCR?  Things are definitely moving for the better, especially if the comments section were any indication. They were chalk full of intelligent comments from faithful Catholics objecting to his awful blog.

Perhaps things ARE turning for the better at the network gone wrong?