Clarín: "Will Pope Francis Carry Out a Historical Turning Point for the Divorced and Remarried" 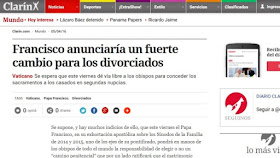 Edit: the real attention-getter is that the heretical Danube Cardinal will be reading it.  We'll remind you that he is not only the man who allowed the vile pornographic creations of the Communist Alfred Hrdlika to hang in his cathedral church (he's also buried in the cemetery)  and bookstore, but he also confirmed the approval of an aberrosexual in a civil partnership as head of the parish council in one of his parishes, in front of the flashing cameras of the media.  We don't understand why a man who adores Conchita Wurst is still a priest, much less a man responsible for the souls of millions of Austrians, but it's not our decision.

(Rome) On Friday in two days, the post-synodal letter of Pope Francis on the family will be presented. So far the only thing  known is that the letter begins with the words "Amoris Laetitia" and that it will be presented on Friday by Cardinals Lorenzo Baldisseri and Christoph Schönborn at the Vatican. Cardinal Baldisseri has been raised by Pope Francis to the state of cardinal and appointed Secretary General of the Synod of Bishops. He is considered a close confidant Pope. Cardinal Schönborn has since 1995 been Archbishop of Vienna and since 1998 chairman of the Austrian Bishops' Conference. He was brought into the College of Cardinals by Pope John Paul II in 1996.
The Dominican from an ancient noble house was particularly appreciated by Benedict XVI. to whose student circle he belonged, and in addition to which he was editor of the World Catechism. However, Pope Francis does not seem to appreciate him any less. The approach is in direct connection with the Synod of Bishops, in which Vienna's Archbishop stuck his neck out too far with daring theories on homosexuality and a "gradation" of the marriage.

Papal thanks for Cardinal Schönborn

Anyway, he is currently the highest dignitary of the German-speaking world, who was afforded visibility by Pope Francis in Rome. During the Synod of Bishops he had entrusted him with an honorable task. Schoenborn was allowed to hold the speech at the ceremony, which was organized on the 50th anniversary of the Conciliar statements. It was Schönborn   above all else, was organized the compromise fomrula on 23 and 24 October, for the final report of the synod, which prevented a breach between a majority of the Synod Fathers and the Pope at the last moment. It was  clear how close it was since one of the controversial articles was nevertheless adopted only by a razor-thin majority of one vote.
That Cardinal Schönborn will present the highly anticipated post-synodal letter "Amoris Laetitia" on Friday, which is meant as thanks the Pope.  From a diplomatically predisposed house - his family represents not only the church, with many bishops, but the old Empire also with ministers and diplomats - Schönborn is the link to the rebellious German princes of the church together with the smug apparatchiks who again are rehearsing their uprising against Rome.
The Argentine newspaper Clarín's headline the day before yesterday: "Francis could announce a major turn for divorcees". The unnamed author's piece awakens the "hope" that Pope Francis "will give the green light on Friday for the bishops to grant the remarried divorcees the sacraments."

Specifically, says Clarín , it will be "hoped" that the pope transmits the power to the bishops   to decide independently whether they would offer a "penitential" course, leading to the re-admission to the sacraments. The newspaper tried to play square the circle:

"The 'penitential way'  confirms on one hand that the Catholic marriage is indissoluble by divine will, while on the other hand it offers the possibility that the divorcee who married civilly for a second time, can regain admission to communion, which was withdrawn from them because they live with their new partners in a state of serious disorder. "

The newspaper asks: "Will the Pope consummate the historic change that a church marriage can be dissolved in certain cases, which it rejects doctrinally, but  allows in practice?"

For the majority of the German bishops the "penitential path"  for the admission to the sacraments must end. If Rome does not agree, they would practice independently, "as they have been threatened on several occasions". [Which they've been doing for decades and even centuries.]
However, there was "strong opposition by conservatives and defenders of doctrine". The newspaper calls by name the Cardinals Gerhard Müller, the "influential" CDF prefect, and Robert Sarah, Prefect of the Congregation for Divine Worship, who stands behind the "the bulk of the African Church."
For them, "marriage is indissoluble and neither the Church nor the pope can change the will of God". The "penitential path" is not a "second chance" to enter a new marriage, as in the Orthodox Church. "There could therefore come some stormy times of the Church," said Clarin.
But Pope Francis will decide? In his book " Codigo Francisco " wrote Marcelo Larraquy: "When he was Cardinal of Buenos Aires,  doctrine was not one of his special interests. He employed more pastoral solutions to the problems of the faithful. "Priests in his diocese had not denied the doctrine, to which they are held. But they could  "feel free" to act on the pastoral level, because "Rome was far away." The canonical prohibition against "remarried divorcees recieving Communion,  did not prevent them from receiving in some parishes."
Text: Giuseppe Nardi
Image: Clarín (Screenshot)
Trans: Tancred vekron99@hotmail.com
Link to Katholisches...
AMDG
Tancred at 8:42 AM
Share