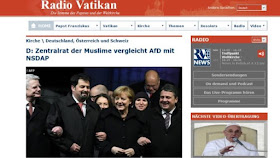 (Rome) Without a critical explanatory note and without giving the attacked AfD the opportunity to make a statement in its defense, Radio Vatican yesterday made the following  folllowing report with the accompanying photo: It shows the "solidarity" over which a very pleased  Aiman Mazyek of the Zentralrat der Muslime in Deutschland (Central Committee of Muslims in Germany) stands with  Bundeskanzlerin Angela Merkel, Bundespräsident Joachim Gauck und Vizekanzler Sigmar Gabriel after the Islamic attack against the weekly magazine  Charlie Hebdo. This is explained what the official Church in Germany thinks about the  AfD , and who it prefers as a partner in discussion.

The President of the  Zentralrats der Muslime in Deutschland has compared the politically right wing  AfD with the NSDAP. In an interview with the NDR, Aiman Mazyek said on Monday, that it is the "first time since  Hitler-Deutschland", that there has been a party that has discredited an entire religious community. And continued saying that the AfD also  existentially threatens.  The Die Alternative für Deutschland (AfD) swims on a wave of Islamophobia. This has become adopted in recent years and is even partly a topic of discussion in respectable circles. The  AfD has tried to intensify this atmosphere. "That isn't an anti-Islamic course, that is an anti-Democratic course," said Mazyek.