Pope Benedict Breaks Silence and Affirms the Thrice Defined, Infallible Dogma, No Salvation Outside of the Catholic Church 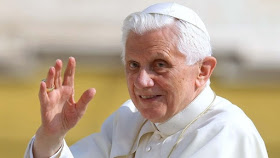 "Council Cast Church and Faithful into a Double Crisis"  - Interview of Benedict XVI
(Rome) Pope Benedict XVI. has broken his silence that he  undertook in connection with his unexpected resignation. Since 2013 he has lived in retirement in the convent, Mater Ecclesiae in the Vatican. Now has given  Avvenire, the daily newspaper of the Italian Bishops' Conference a long interview, which was published in today's issue.

HERE YOU CAN ADVERTISE »
"Let us allow ourselves to be formed by Christ," is the title of a spiritual interview which addresses faith and theology.  It does not involve daily affairs and church politics.
The interview was conducted by the Belgian Jesuit, Jacques Servais, director of the Casa Balthasar in Rome. Father Servais was under Cardinal Ratzinger from 1985-1990 an official in  the CDF and from 1993-1996, the professor of dogmatic theology at the Institute of John Paul II. in Rome. He has published works on Cardinal Newman, Hans Urs von Balthasar and Adrienne von Speyr.

"Without being bound by salvation even the faith is baseless"

The central question of the interview is: "What is the faith and how does one come to believe?"
Emeritus Benedict XVI. spoke to the Church crisis in the interview:

"The missionaries of the 16th century were convinced that the unbaptized were lost forever. After the Council this conviction was abandoned. This resulted in a deep crisis. Without being bound to salvation the faith is baseless."

On the anthropological aspect of man, technology and love:

"People expect in their hearts that the Good Samaritan comes to their aid. In the hardness of the technological world in which feelings count for nothing, the expectation increases of a saving love that is unselfishly bestowed."

For increasing importance of charity:

"It is a sign of the times that the idea of ​​mercy coming from Sister Faustina  becomes ever more central and more dominant."

Father Servais asked  Benedict XVI. about the justification dispute of Martin Luther and the struggle of St. Francis de Sales, who had followed in the wake of the Apostle Paul  for the pastoral care of as many "infidels" as possible against the "terrible fate being eternally lost."  Benedict XVI. proceeds in his reply in detail on the "development of this dogma" Extra Ecclesiam nulla salus, because since the beginning of modern times, the historical perspectives with respect to the Middle Ages had changed "radically".

By giving the up the Church's necessity for  salvation, the Council sparked a "double crisis"

Thus, with the fact that the Second Vatican Council has "definitely" abandoned the belief  that there is no salvation for unbaptized, the Church and the faith had fallen into a "double crisis".

"On the one hand  it seems to withdraw any motivation a future missionary commitment. Why convince people of accepting the Christian faith, even if they can be saved without it?
But for Christians, the question on the necessity of faith and manner of life was uncertain and problematic. If there are those who can be saved in other ways, it is ultimately not evident why the Christian should be linked to the need of the Christian faith and its morals. But if the faith and salvation are not dependent on each other, the faith is also groundless.
Recently, various attempts have been made ​​to bring to reconciliation the universal need of the Christian faith with the opportunity to save oneself without them."

Benedict XVI. then addresses two of these "attempts", including the thesis of Karl Rahner's "anonymous Christian",  in the being of Christ is synonymous with humanity. "It is true that this hypothesis is intriguing," but it excludes  "the drama of change and renewal, which is central for Christianity."

"Even less acceptable is the solution proposed by the pluralistic religious theories  for all religions, each in their own way, are ways of salvation  and to be considered in this sense, in their effects, as equivalent. The religious criticism, the way it is practiced on the Old Testament and of the primordial church, is much more realistic, concrete and true in its examination of the various religions." The pluralistic religious theories are "superficial" and "is not appropriate to the size of the question."

Finally, Benedict XVI names a third solution proposed,  that of Henri de Lubac,  "and some other theologians" who had placed their emphasis on the standing substitute that vicarious substitution. So that it may be that  "the problem is not solved completely."  But it would involve a "material intuition", where it is total but "clear", "that we must think about the whole issue."
The complete interview in the Italian original (Avvenire) .
Text: Giuseppe Nardi
Image: Avvenire (Screenshot / Vaticanva / OR
Trans: Tancred vekron99@hotmail.com
Link to Katholisches...
Professional translation also by the Maike Hickson...
AMDG
Tancred at 8:02 PM
Share