Note: someone just wrote complaining on behalf of RCIA programs. While they exist officially to bring people into the Catholic Church, the laity entrusted to operate these programs are woefully underformed, often malformed and heretical, as is typical of most diocesan parishes.
Edit: URGENT -- Bugninine Liturgy in trouble and in decline in Western world due to religious indifferentism, and it doesn't matter how many Gospel/Folk/Easy Listening 70s Power Pop you include. If there isn't enough evangelization going on in places where the Immemorial Mass of All Ages is being said, it's actually forbidden or frowned upon in diocesan parishes. Why evangelize when your liturgy resembles that of the Methodists and Lutherans down the street? And if the Mass crowd stuck in the 60s with St. Louis Jesuits are indifferent to evangelization, hasn't the Pope himself spoken out against proselytism and made statements which frustrate evangelism in the first place? If evangelization is a dirty word anywhere, it's in the run-of-the-mill ho-hum diocesan parish.

Here's an excellent response to Msgr. Charles Pope's urgent call for more evangelization (As if traditionalist Catholics don't). Actually, traditionalists are most likely to be the only people in the Church who bother.

SEVERAL YEARS AGO, Msgr. Charles Pope made headlines when an Archdiocesan blog published his defense of Gospel music for the Roman Catholic liturgy. While I appreciate the genre of Gospel music—and some pieces are lovely—I was troubled by his assertions with respect to music history. 1 On 7 January, Msgr. Pope wrote a piece for the NATIONAL CATHOLIC REGISTER with a sensational title:

“Urgent Warning About the Future of the Traditional Latin Mass”

Throughout his article, Msgr. Pope says things like: “The Traditional Latin Mass appeals to a certain niche group of Catholics, but the number in that group appears to have reached its maximum.” He keeps referring to a “ceiling” that’s been reached, making inexplicable references to “20 years ago, when the Solemn Mass was thriving.” His description of the EF early years does not match my recollection of the 1990s, nor accounts by pioneers like Fr. Michael Irwin (one of the first FSSP priests assigned to the USA).

Msgr. Pope seems to be unaware of charts like this one: 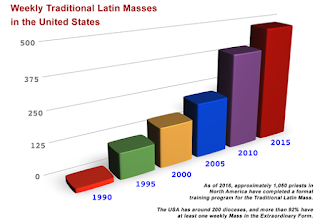