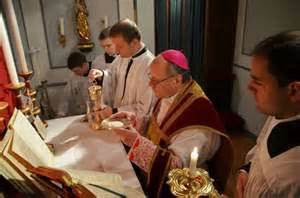 Edit: Bishop Huonder has been a faithful Catholic bishop in German speaking Switzerland, possibly the only one. He's been featured here on this blog for some time, and it's a wonder he's persevered as long as he has, given the resistance of the Swiss civil servants who hold most of the official posts in his dioces and sabotage him.
We don't expect he will survive this professionally and may join other bishops like him, who've been unjustly dealt with in early retirements.
Here's an eloquent post from Deacon Keith Foirnier in defense of this embattled and noble Catholic bishop, and friend of tradition:

In the politically charged language of the present, Bishop Vitus Huonder is a “conservative” if not an “extremist.” In fact, he is simply a faithful Catholic Christian. And for that he’s being threatened with three years in jail. It’s happening in Switzerland, but the conflict epitomizes a wider phenomenon of anti-Christian secularists on both sides of the Atlantic using the courts to target Christians for simply standing up for biblical truth.
In 2011, Huonder, the Catholic Bishop of the Diocese of Chur in Switzerland, supported parents being able to opt out of having children as young as four subjected to mandatory “sex education” which rejected the truth about the dignity of human sexuality, the gift of sexual differentiation, and marriage. In 2013, he issued a pastoral letter to the faithful under his care exposing unbiblical gender identity theories and defending the Christian vision of the human person, the family and a truly just and human social order. He called upon the faithful of the Catholic Church to “use their social rights” to protect “the dignity of man founded on the order of Creation and of Redemption.” Last February, he called for a Swiss priest who had purportedly “blessed” the union of a lesbian couple to step down from his ministry.
Here is the challenge he faces. In Switzerland, there is a wholesale rebellion against the Christian vision of the human person, and of the family and society founded upon it. Leaders of the rebellion abhor the clear and unchangeable teaching of the Bible and the Catholic Church. Included in the ranks of these dissidents are some Catholic clerics. To say their leaders do not like this Catholic Bishop is an understatement.
https://stream.org/bishops-faces-three-years-in-jail-for-defending-marriage/
AMDG