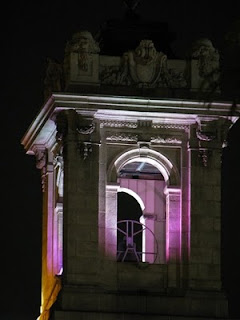 Update: it looks like Cardinal Burke is going to be in the itinerary of some kind of Neo-Knights Templar Conference, leading a Pilgrimmage to the Our Lady of Guadalupe Shrine in La Crosse, on Monday the 21st of September. Again, thanks to reader for the information.

Edit: Cardinal Burke, who has a lot of time on his hands after being fired by the Pope from his position at the Apostolic Signatura was still in a position to do some a lot of good by saying the Immemorial Mass of All Ages in a historic event at one of the most evil parishes in the Archdiocese of St. Paul and Minneapolis.   The event was to take place at 10:00 in the morning on Saturday, September 19th at St. Mary's Basilica in Minneapolis. After making some inquiries we have no reason why the Holy Mass was cancelled, except that perhaps the rector and the Devil himself don't approve of it.

In addition to the possible disapproval on the part of the  questionable leadership at the parish, things are especially bad recently in the Archdiocese as a whole, since one of the Cardinal's confreres, the faithful Archbishop John Nienstedt, has been hounded from his position as Archbishop owing to the all-too-familiar media blitzkrieg and a host of disloyal elements among his clergy and even his own chancery.

Perhaps the reason is the evil reputation of the Basilica itself?

When they're not prostituting themselves to the zeitgeist, promoting deviancy at various fairs and events, surely leading souls into Hell, they're probably the most singular anti-Catholic presence in the Archdiocese as a locus of dissent and disobedience.

The place needs to be reconsecrated anyway, in our humble opinion.

The Immemorial Mass was to be celebrated in the context of an event sponsored by the Knights of Malta of the Holy Sepulcher meeting, which will hold some events at the Basilica, which is somewhat understandable since Cardinal Burke is the Patron of the Order of Malta another equestrian order. [Hence our initial confusion that these people were Knights of St. John (Malta).]   What doesn't make sense is why an equestrian society of Catholic gentlemen would associated themselves with the evil St. John's Bible and the Faux-Benedictines of Collegeville. One of the events in the bulletin so kindly provided by a reader shows:


One of the principal problems with the bible, apart from the false claims surrounding it, and its price tag, is the calligrapher, who is himself an atheist.
Tancred at 12:43 PM
Share