Lombardi's Clarification on the "Mouth of Truth"

(Rome) Vatican spokesman Father Federico Lombardi SJ responded with a letter to Vaticanist Sandro Magister  on his using  Lombardi's statements in the August issue of National Geographic about Pope Francis. Statements that show a very different pope, other than that which is generally celebrated (see The "Mouth of Truth" - Vatican Spokesman Lombardi on Pope Francis " ).
The text of Father Lombardi's letter with its "clarifications"  are an "interesting and enlightening enrichment" of the article, says Magister.

Referring to your article, which reproduces some of my statements that have been published in the report on Pope Francis from National Geographic, I would like to make some clarifications.
To be honest, I was a little surprised at the approach of the National Geographic. We have been standing for them for months for their pictures, and apart from a first conversation a few months ago, in which they explained what they wanted to do, they've never asked me anything about the Pope. Now, however, they are using quite extensively what Federico Wals reported about me, a person who is located in Buenos Aires and I have seen only briefly many years ago [the picture shows Wals behind the former Archbishop of Buenos Aires, whose press secretary he was, note, Sandro Magister].
A - "confused" - jocular remark I might have said with a smile at some point (if I had said anything) was certainly always accompanied by reflections on the learning phase that I went through, as it happened, as I   should myself behave in the new situation, about which I would say at the same time that it was an extremely interesting situation that marked an extraordinarily positive dynamic. 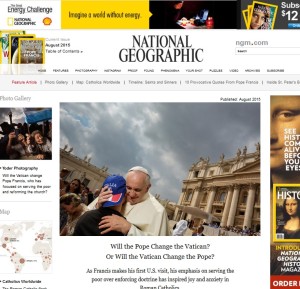 Pope Francis in National Geographic
In addition, for example, is what I said about the nature of the two popes at specific audiences, I would say, was not balanced. It is true that I have spoken always and without problems, in different places, on this difference, but always so that I emphasized the exceptional "Charisma" in the encounter of Francis with other people and his interest in this is distinguished in the conversation while the Secretary of State is left to the deepening of specific and technical issues.
Finally, the remark about the relation between the  Secretariat of State and the Economic Secretariat, since the latter was constituted only recently and relations were only to be defined (there were no statutes, etc.), is something I would obviously  talk differently  about   today. Although I speak of "spontaneity" in connection with Pope Francis,  I do not mean a lack of reflection, but rather the honest and transparent expression of an inner attitude.
In short, I do not feel very comfortable when a visitor a long time ago from Buenos Aires, Wals, when words said to him are picked up by an editor of National Geographic and brought to an audience, and moreover also by you. But patience, as it happens sometimes, is not completely understood.
Sincerely
Federico Lombardi
Introduction / translation: Giuseppe Nardi
Image: Settimo Cielo
Posted by Tancred at 3:48 PM

Wait a sec, show the full picture of Jorge throwing the "hidden hand", otherwise how will is freemason buddies see he shout out?