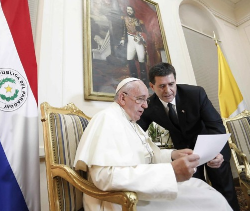 Pope Francis in Asuncion Paraguay
(Rome / Asuncion) the Pope used the word "hermeneutics", a word unusual for him, at a press conference on the flight back from the trip to Ecuador, Bolivia and Paraguay. Within minutes, he used this word eleven times and asked, it should also apply in the context of his words, "in fact it  is often suitable for two- and ambiguous interpretations," said Vatican expert Sandro Magister. Promptly, two days later,   Osservatore Romano dabbled in to be the first to offer  an interpretation of the papal words.  The blooper  Pope Francis had scored with his penchant for casual free speech in Asuncion was passed over in silence.
The Brazilian Msgr Dario Vignanò ventured to make an analysis of the free speech style of Francis. He dedicated his first public statement as the first prefect of the newly established Secretariat for Communication through the "communicative style of Bergoglio between oral form and concreteness". The actual title of the article reads: " Francis in the Global Village."

Msgr. Viganò is the first head of dicastry in  o the Roman Curia who is neither a bishop  nor raised to Bishop  with his appointment. Viganò took over in 2014 from Vatican spokesman Father Federico Lombardi, the management of the Vatican Television Centre CTV, a task which he retains, and carries since 2004 receiving  the title of Honorary Pontifical Chaplain.
It seems that Msgr. Viganò  apparently randomly used the address by Pope Francis to the youth of Paraguay for his theses. The speech on the evening of July 12 was given extemporaneously by the Pope after he had rejected the prepared manuscript.
Viganò wrote: "I believe that the key to understanding the communicative practice of Pope Franzikus is to look in the now classic studies on the relationship between the oral and written. A prepared speech is boring, because it is a text, which has been designed in writing. We know how the written culture has prized abstract thinking, abstract thinking and objectivity over oral conciseness."

"The Pope's style, however, is a more than an ample style, capable of the ultimate strength of  context - the reference to the hermeneutics during the press conference on the flight back from South America was clear - and  captured the concreteness. By no means does redundancy appear negative, but rather as an intrinsic necessity for those who communicate orally, one the one hand, rapid steps forward rushing along the paths of the word and at the same time proceeding in a zigzag manner by associated by its frequent repetitions, what he has already said."
Viganò concludes:
"The speeches of Pope Francis is a revival of the ancient practice of word of mouth communication, in turn, facing a recognition and stability of actual community, by triggering a network, based on the pleasure of a rediscovered embrace between humanity and the Gospel." 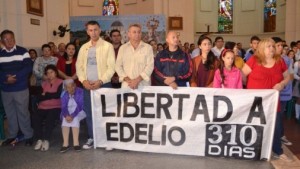 In a Church Praying for the Release of Edilio Morinigo
"Redundancy, repetition, zigzag exemplary striding ... Had Msgr. Viganò not spoken of Francis to the youth of Paraguay as the basis taken for his study, but the speech of the day held before the pope to the civil society representatives in Asuncion, he would have recognized not only the benefits but also the limitations of a too naive 'orality' of communication," said Sandro Magister.
There Francis said in his free speech:
"There are things that I want respect yet take before I close. And since politicians are present - also the President of the Republic - I say it in fraternal form.  Someone told me, 'Listen,  Mr. So and So has been kidnapped by the army. Do something!'  I am not saying whether it's true or not, whether it is fair or not, but one of the methods, which applied to the dictatorial ideologies of the last century, of which I have just spoken, was to remove the people, either by exile or by captivity, or - in the case of Nazi and Stalinist extermination camps - they were removed by death. Thus there is a real culture in a nation, a political culture and a culture of the common good, it needs swiftly clear processes, transparent processes. Another type of maneuver is not beneficial. A transparent, clear justice. This will help all of us. I do not know if there is such a thing here or not; I say it with all due respect. You told me so when I came in, they told me here. And may I  - for I do not know who - ask; I have not understood the names well." 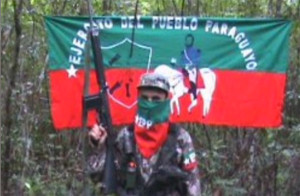 Marxist-Leninist Paraguayan People's Army EPP
The name Francis had "not well understood"  is that of Edelio Morinigo, officer of Paraguayan Army (Ejército Paraguayo). Morinigo was kidnapped a year ago, but not by the regular army, which he himself belongs, but by a self-styled Paraguayan People's Army (Ejército del Pueblo Paraguayo, EPP), a Marxist-Leninist terrorist organization that was founded in 2008, which wanted to overthrow the Paraguayan government  and establish a communist republic.
Although Pope Francis himself admitted to know nothing about the case and had not even understood the name of the person concerned, he had no qualms, in complete ignorance of the facts to "brotherly" and publicly accuse the Paraguayan government and specifically the president of a crime, which he put into a context of the worst atrocities of the Nazis and Communists.
"Hats off to the attitude of Paraguayan President Horacio Cartes, who was unaffected by any reaction to an impressive public affront," says Magister.
Text: Giuseppe Nardi
Image: Settimo Cielo
Trans: Tancred vekron99@hotmail.com
Link to Katholisches...
AMDG
Posted by Tancred at 1:30 PM

"That is why it was called Babel, 'Confusion', because it was there that the Lord confused the whole world’s speech, and scattered them far away, over the wide face of earth." Genesis 11:9

Confusing speech being a scourge of God.

The DOCSS (Department of calling shit shinola) has spoken. The case is closed.

O, and if Satan desired a Pope who would do maximum damage to a Divinely Designed Office and drag it down beneath the level of the mundane morning TV talks shows, could he have picked any other man to do it more effectively than Franciscus has?

Have you ever noticed the similarity of the Vatican to a can of mixed nuts?